A mur'gul as seen in The Frozen Throne. 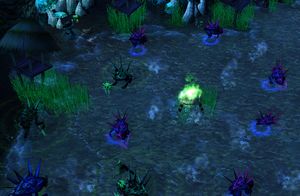 A mur'gul village in the Den of the Lost.

Mur'gul are "normal murlocs"[1] that were seen as creeps and units in Warcraft III: The Frozen Throne.[2]

Lady Vashj's naga have enslaved a number of mur'gul, and has used them as both cannon fodder and a labor force. Mur'gul Slaves and Mur'gul Reavers are used by the naga as their most basic units.

Some time after the Battle of Mount Hyjal a group of wild mur'gul appeared in Azshara and were encounter by Maiev's group of Watchers.[3]

Mur'gul differ from murlocs in that they have larger teeth, armored scales, and spikes on their backs. Some murlocs, but not all, later used the mur'gul model with the spikes (and not their usual fins) and mur'gul likely influenced their current design.

Mur'gul are monstrous humanoids who have thick, warty skin, webbed extremities ending in claws, and bulbous eyes that have a feral gleam. A row of needle-sharp teeth poke from their frog-like mouths.[4] A few long spines jut from their backs.[5]

These creatures were once murlocs, but were cursed and twisted by the powers of the Burning Legion. The mur'gul delight in capturing both humans and murlocs — torturing and then eating their victims. They infest the sea, clambering aboard vessels and slaying everyone onboard.[4]

The first bit of the above paragraph was made more vague in the later Dark Factions version with the addition of the following.

Mur'gul are vicious, murloc-like aquatic humanoids. Scholars speculate as to their origins. Some say that these creatures were once murlocs, but the Burning Legion's powers cursed and twisted them. While mur'gul resemble murlocs to a degree, they are far more vicious and bloodthirsty — and dangerous.[5]

Mur'gul are distinct from mutant murlocs having originated earlier and being significantly stronger.[4]

These beings form small groups — often, but not always, related. Such gangs steal from one another, and mur'gul will try to raid nests of rivals for eggs to eat. Mur'gul organize in a rather spontaneous way, primarily to raid murlocs or humans. If these raids go poorly, the mur'gul may very well turn on one another. Mur'gul wander and many do not even have a fixed territory; lairs are temporary affairs used to hold prisoners or for mating. They only keep equipment they can either use or carry easily, though a temporary lair may have treasures from past victims.[4]

These savage creatures fear only one race: the naga of Nazjatar. Despite their own vicious nature, mur'gul are superstitious and fear the magical power of the naga.[4]

Mur'gul will press any advantage, though they begin with nets to subdue victims. They swarm over their enemies, tearing them to pieces and feeding right on the battlefield. More powerful enemies are lured into the water where the mur'gul have a greater advantage. Mur'gul quietly tear at the bottom of ships and break rudders before attacking.[4]

Mur'gul are able to breathe in both air and water environments but are only partially amphibious, as they are much more comfortable in — and adapted to — underwater life. Mur'gul can function perfectly well out of water for one hour, any more than that and they are overexposed to the air and become fatigued. To recover they must immerse themselves in water for at least an hour.[4]

Like that of murlocs, mur'gul skin color varies greatly, from pale green to purple to turquoise to red. Their skin is warty and knobbed, not as smooth as a murloc's. A mur'gul's body usually bears spots and speckles of a contrasting color.[5]

Mur'gul automatically know how to speak Nerglish, and can know Common, Low Common, and Nazja. They are also capable of picking up the languages of the creatures with which they interact.[5]

Mur'gul necromancers are specialized. Unlike most necromancers, necromancers rarely deal with undead. Instead, they use their magic's power over life forces to debilitate and slay their opponents.[5]