Muyoh is a level 20 tauren and a disciple of Naralex found in the Wailing Caverns and the Overgrown Camp in Southern Barrens.

Muyoh is one who has remained uncorrupted within the Wailing Caverns. Once you enter the instance, he is the first thing you'll meet. He informs you that Naralex has gone to sleep. Naralex's dreams then became nightmares, which is the cause of so many deviate creatures appearing in the Wailing Caverns. However, he can't wake up Naralex and end his nightmare until the four Fanglords are defeated. Thus, he asks you to eliminate the four leaders of the corrupted druids. When you talk to him, he will cast 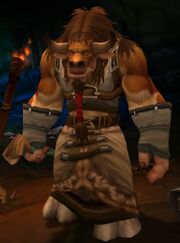 In the Wailing Caverns. 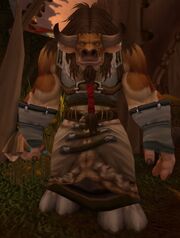 At the Overgrown Camp.

Long ago, Naralex journeyed to this cavern with the honorable goal of entering the Emerald Dream and regrowing the Barrens into a lush forest. His focus waned and his thoughts became tainted by serpentine visions.

Now, reptilian beasts seep from his dreams to the land. He must be awoken from the nightmare of he will be forever lost, and a great evil unleashed.

Only after his corrupted servants, the Fanglords, have been slain can I preform the awakening ritual.

The Fanglords are dead! All hope is not lost!

The awakening ritual is quite complex, however. It cannot be done alone.

I will handle all of the necessary preparations but I will need you to protect me. The nightmares summoned from Naralex's journey through the Emerald Dream prove to be quite formidable. Without your help, this mission is doomed.

When you are ready to defend me, say the word, and I shall lead the way to Naralex's chamber.

Southern Barrens
I have a few ideas on how to help heal the overgrowth, <class>.

Unfortunately, Naralex is so upset, he refuses to take any more chances.

If you've dispatched all four Fanglords, be ready to head back to the entrance of the dungeon and tell the Disciple of Naralex that you're ready to awaken the sleeping Druid. You are now on an escort event. You will need to defend him against 2 raptors at the first turn and against an onslaught of vipers once he reaches the circle of torches.

He will finally arrive at Naralex's chamber and will begin the ritual of awakening. This will take a long time so don't panic if you seem to be standing around with nothing happening. You will be facing the final gauntlet of the instance — so stay ready and make sure you have all buffs on and potion timers ready, because this is a tough fight if you're in your low 20's.

You will be facing several waves of incoming mobs trying to stop the ritual from being completed. The first wave consists of 3 level 20 elite Deviate Moccasins. The second wave consists of many level 20 non-elite slimes. The final wave is a gargantuan level 22 elite murloc named Mutanus the Devourer. If you manage to defeat this boss, Naralex awakens, all the monsters and Druids of the Fang in the Wailing Caverns disappear, Naralex and his tauren disciple transform into owls and fly away. Mutanus the Devourer also drops the

[Glowing Shard] that is, apparently, a reflection of the Emerald Dream. After some journey, you are asked to take this gem to the archdruid in either Darnassus or Thunder Bluff (depending on your faction) who, after looking at the crystal, thanks you for your troubles and gravely informs you that something is wrong in the Emerald Dream.