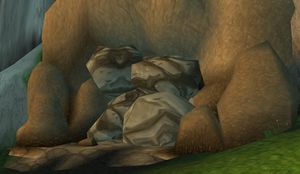 is the easternmost of the three caves in the Red Stone Run. Immediately to the north is Kukuru's Grotto, and further west is Tsavo'ka's Den. The cave is blocked by a cave-in. However, at the base of the cave in is a Tattered Note...

The tattered note suggests to find one of the

[Timeless Legends] on the isle, and use the provided bonus ability on the Cave-In. Should players somehow find themselves locked inside the mysterious den, there is a Rock-breaking Hammer on the inside that can be used to break the cave-in as well. Either method of breaking the cave-in will immediately summon Spelurk, a rare mistlurker.

The layout of the rocks has been changed.