The Mythic+ dungeon system provides an endlessly scaling challenge in 5-player Mythic dungeons. This system allows a group of five players to compete against a timer, similar to Challenge Mode, but has much more lenient times so that the emphasis is on solid execution rather than pure speed.

All the dungeons introduced with Legion have a Mythic+ mode, except for Assault on Violet Hold.

In order to start a Mythic+ dungeon, at least one player in the party must have a 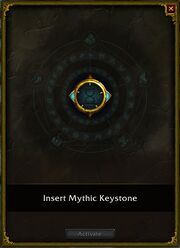 An empty Font of Power.

Once the Activate button is clicked, this will force all players to reload their UI, place a ghostly green wall in front of the party, and begin a 10-second countdown timer. When this reaches 0, the wall is removed and the Mythic+ timer begins.

Just like in Challenge Mode, the players' aim is to defeat all of the bosses in the dungeon, as well as a set amount of trash, before the Mythic+ timer expires.

Keystones can be upgraded up to 3 levels based how fast to complete the dungeon.

A toast window will pop up when you complete the dungeon, displaying whether you beat the timer or not. This window also shows how many levels the Keystone is upgraded by if you successfully beat the timer.

The Mythic+ system has no lockouts, meaning the same Mythic+ dungeon can be completed as much as desired, as long as at least one player in the party has a Mythic Keystone.

You cannot change party members once you have begun a Mythic+ dungeon. If one of your players disconnects, or leaves the group, the dungeon must be reset in order to refill the group. This will lower your Keystone by one level since patch 7.2.5.

Mythic+ dungeons, at least up to level 10, are balanced so that proper execution is a bigger factor in the party's success than any particular composition.

You cannot change talents or specs while inside the dungeon once you have begun. However, you can zone out of the dungeon and use a

[Tome of the Tranquil Mind] to change your talents before re-entering.

While inside a Mythic+ dungeon, all players are affected by Challenger's Burden. Whenever a player dies, 5 seconds is removed from the timer as a penalty. The Challenger's Burden debuff forces the party to consider whether a "death run" - streaking past a long stretch of trash mobs only to die and be resurrected in a safe location beyond them - is strategically beneficial. In certain cases, such as the opening hallway in Black Rook Hold, the party may determine if it is worth saving their potion cooldown (and using potions for 10 minutes), instead of killing the trash or using Invisibility potions.

This also serves as an indicator to the party that they may not be ready for a certain Mythic+ level. If accidental deaths are too frequent, the party will run out its clock long before completing the dungeon. Players will either need to come back with better gear, or improve their techniques and strategies in order to succeed.

A level 7 Keystone has Affixes

The Mythic Keystone are special items that allow a player to begin a Mythic+ dungeon. Two examples of Mythic Keystones are shown to the right. The tooltip for these Keystones lists important information:

A player may only possess one Mythic Keystone at a time, and will only receive one keystone per week. If the current Keystone was deleted, another one won't be available from any of the possible Keystone sources until after the weekly dungeon reset.

If it was accidentally deleted, it can be recovered through the Blizzard Battle.net Item Restoration service. However, with patch 8.1.0, the keystone can no longer be deleted.

There are three ways to obtain one a Keystone:

With the changes in patch 7.2, each player will have their own keystone that cannot be depleted. If the level gets too high for your liking, you may lower the Keystone's level by 1 step at a time by starting the dungeon, and then resetting it. This can be done solo.

If one successfully complete a Mythic+ dungeon within the time allotted, the Keystone that was used to start the attempt will become upgraded by at least 1 level. The faster one clears the content, the larger the upgrade, up to a maximum of 3 levels higher.

At the end of the dungeon run, the upgraded Keystone will be placed in the initiating player's bag. Each time a Keystone is upgraded it will select a new dungeon at random from the set of dungeons the initiating player has access to (Cathedral of Eternal Night does not follow this rule). For example, if the player who started the run has not yet unlocked The Arcway/Court of Stars dungeons, the Keystone will only choose from the remaining valid dungeons. 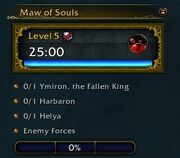 An affix is an additional property that affects the way enemies within the dungeon will behave. Since Battle for Azeroth, Affixes appear on all Mythic+ dungeon keys. However, each affix now has an assigned minimum level for it to be eligible to appear. The first affix is gained at level 2, the second at level 4, the third at level 7, and the fourth at level 10. If the Keystone has an affix listed on it, then all of the enemies in that Mythic+ dungeon will inherit this property.

Active affixes are set game-wide on a week-by-week basis (excluding the seasonal affix), and will remain the same for all players until the next weekly reset. This means that every keystone will have the same set of level 2, 4, and 7 affixes for the week.

At Mythic Keystone level 2, players will see their first affix. It will be printed on the keystone's tooltip, and information about it will appear both on the Font of Power interface, Mythic Dungeons interface, and the objectives frame (where the timer and kill count are displayed) during the dungeon run. The Level 2 affix will always be one of two specific affixes, switching between them each week - all players who enter a Level 2+ Mythic+ dungeon will have the same affix.

At Mythic Keystone level 4, players will see a second affix added to their keystone. This affix comes exclusively from the following list:

At Mythic Keystone level 7, players will see a third affix added to their Keystone. This affix comes exclusively from the following list:

Since Battle for Azeroth, a 4th affix has been added to be applied to keystones at level 10 or higher. Unlike the other affixes, this affix does not change week by week. Instead it will span for the entire Mythic+ season, and then change with every new Mythic+ season going forward. At the start of the new season, the previous season's affix is permanently removed. The seasonal affixes have so far been themed off of a major boss found in the patch's current raid instance.

This new affix is added to the existing level 2, level 4, and level 7 affixes, so level 10+ Keystones have four affixes in total. All players who enter a Level 10+ Mythic+ Dungeon that week will have the same four affixes.

The aim of these level 10+ affixes is to make the high-level Mythic+ dungeons noticeably more difficult, so that progressing beyond level 10-15 represents extreme dedication to this type of content. Mythic+ teams who wish to push beyond Mythic+ level 10-15 are likely to require specific group compositions and use highly refined strategies. Currently, loot does not improve past level 15, and players do not need to beat the level 15 timer to achieve the greatest possible loot reward from Mythic+ content, so all specs and classes should be able to compete for the best loot available.

The following is a list of affixes that were permanently removed from the game, and will no longer appear on keystones. So far, only one non-seasonal affix has been removed.

There are two types of loot associated with Mythic+ Dungeons: a chest at the end of the instance, and a chest from your faction's hub the week after.

Please add any available information to this section.
Completing dungeons above +15 will offer increasing weekly rewards of bonus

[Heart of Azeroth]. It will also offer increasing weekly rewards of

[Titan Residuum], however the item will remain the same as a +15 item.

[Echoes of Ny'alotha] will also have increased rewards depending on the keystone level.

The dungeon chest drops are taken from the loot table for the dungeon the players have completed.

The weekly chest drops may be from any dungeon. This gear will be at least a Corrupted version of the type of gear you would have gotten from your best Mythic+ dungeon - so for example, if you cleared a Mythic 5, you will get at least a Mythic 5 Corrupted item. The chart below shows the minimum ilvl you will get from each source:

These item levels are expected to change in the Shadowlands expansion, as they did for patch 8.1.0, patch 8.2.0 and patch 8.3.0 in the Battle for Azeroth expansion.

Artifact Power rewards have received some updates in patch 7.2:

In 7.3, the amount of Artifact Power has changed since the dungeons have been rescaled.

There are also Artifact Power rewards from the Order Hall chest awarded weekly.

The dungeon chest drops are taken from the loot table for the dungeon the players have completed.

The Order Hall chest drops may be from any dungeon, including dungeons that have not yet been unlocked for that character (e.g. Court of Stars/The Arcway) or dungeons that do not have a M+ mode (e.g. Assault on Violet Hold). This gear will be at least a Warforged version of the type of gear you would have gotten from your best Mythic+ dungeon - so for example, if you cleared a Mythic 5, you will get at least a Mythic 5 Titanforged item. The chart below shows the minimum ilvl you will get from each source: