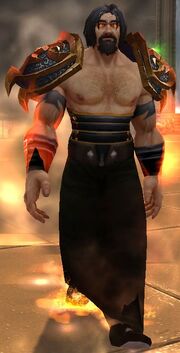 Myzerian in his human form

Myzerian is a level 85 elite black dragon found circling around Obelisk of the Moon in the Uldum. He is Deathwing's emissary overseeing Commander Schnottz's expedition within Uldum. At first he takes a human guise, however adventurers' actions on behalf of Harrison Jones cause him to reveal his real form.

[Shroud of the Makers], Myzerian is caught up in the explosion that kills most of the elite Schnottz troopers guarding the obelisk. While still flying, he obviously took some damage as he is both on fire and repeatedly dropping out of the sky. It is only in this weakened state that he can be killed, as it is impossible to kill him both in his human form and when he is at full health thanks to a full-heal self-buff that ticks every five seconds.

[Shroud of the Makers], Myzerian is weakened and at a third of his maximum health (767,151/2.3 million). There are also no other enemies in the area to contend with. Myzerian is not immune to most forms of crowd control, so rooting, stunning, snaring, etc... all work.

Any class capable of kiting can finish Myzerian off without losing any health, as all of his attacks are either melee range, point-blank AoEs, or ground-targeted AoEs with a few-second travel time. Circle around the obelisk. Be aware of the Rupture and Fire Spit abilities, as those are the only two abilities that can hit units at range.

Grouping up with a tank and a healer also works, but kiting is recommended even in that case. Like most dragons, he has a frontal cleave and a tail swipe ability, so don't stand immediately in front of or behind him.

[83] Reduced Productivity he wards himself with