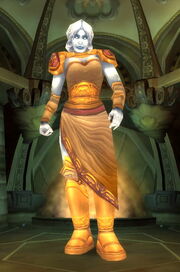 Nablya is a titanic watcher found in the Shaper's Terrace in Un'Goro Crater. During the ordering of Azeroth, the titan Khaz'goroth designed Un'Goro Crater to be an area for experimentation. Once the Pantheon was finished ordering Azeroth, the titan left the region to be managed by his apprentice, Nablya. Since then, she has been performing tests and watching over the lifeforms in Un'Goro.[1]

There is nothing here for you. Now go.

Un'Goro Crater serves a very specific purpose, <name>. It is now time for you to learn that purpose.

I am Nablya, apprentice to Khaz'goroth and envoy to Un'Goro Crater. I am known as the Watcher.

I stand here in the place of my master, who has since left Azeroth. He once stood in this very spot when he shaped many of his creations.

What are you doing here?

I am observing. It is my charge to watch over Un'Goro, and I do so from this spot.

I am also performing tests, and recording the results. These tests allow me to observe that which most interests me.

Tests? What kind of tests?

Simple stimulus-response tests. Normally my kind does not interfere with the matters of Azeroth, but here in Un'Goro, we are free to take a more direct approach. As Un'Goro is the experimental ground of the Titans, it is our right to do so.

For example, say Khaz'goroth wants to know what happens when one of his creations is exposed to a sulfurous hot spring. He could wait for millennia, observing, and waiting for the creature to accidentally stumble and fall in. Or, he could place the creature in the water himself.

His creations? So you're saying that all the creatures here in the crater are Khaz'goroth's creations?

Not exactly. In fact, many of the creatures here in the crater existed long before my master arrived... but some did not.

Nevertheless, we observe them all, without prejudice.

Why are you telling me all of this?

When the Cataclysm struck Azeroth, it disrupted the cloaking mechanism that kept this terrace hidden. At that point, it was only a matter of time until the intelligent races discovered me here.

This was a scenario that, quite honestly, we did not foresee. It required us to perform some new tests. And you, <name>, are my test subject.

Nablya, I must ask... did Khaz'goroth create me and the rest of my race?

I am not authorized to answer that question. I am, however, permitted to offer you a suggestion:

He has already learned much of what there is to know about us, and he is teetering on the verge of another discovery. Help him, and he may help you uncover the knowledge that you desire.

Do you understand now, <name>?