For the sea witch that Thrall and his orcs fought against on the Darkspear islands, see Zar'jira.

A Naga Sea Witch in Warcraft III: The Frozen Throne. 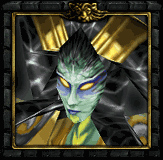 The Naga Sea Witch was a mystical naga Hero, adept at ranged combat. These scaly denizens of the ocean have often been associated with the coming of prodigious storms, but few have actually seen them rise from the sea and lived to tell the tale.

While naga sea witches are better with their marksmanship skills,[citation needed]  they are also capable of magic powerful enough to create tornadoes and lightning storms.

Priestess of the tides is the naga priest variant class. They are potent spellcasters. Informally, they bear the name "sea witch". They are naga who revere their queen, Azshara. It is their faith in her and in naga superiority which grants them power. They wield the freezing cold of the arctic north; they command the fury of ocean storms. They also draw upon their race's arcane legacy to protect themselves. Most priestesses of the tides are females. The occasional male naga joins their ranks; however, these are vanishingly rare, as most male naga don't have the intelligence (or spirit) to make spellcasting a viable pursuit. Male naga who join these ranks are called priests of the tides.[2]

The iconic priestess of the tides is a calculating and cunning opponent. She plans her attacks well in advance, and enemies find that other naga support her. She moves among their ranks, frost shimmering at her arrowheads and thunder sounding in the sky.[2]

Coilfang Fathom-Witch may be a sea witch using shadow based abilities, unlike the freeze spells. Tidesinger, Stormspeaker and Stormweaver may be alternate names based on the mobs using storm abilities.