For the mob, see Naga Brute. 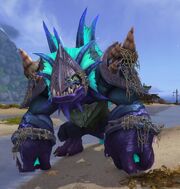 Naga brutes[2][3] (also known as behemoths)[4] are huge, mutated naga used as heavy fighters and even as siege weapons by the naga army. Some have rank, while some act more like mere beasts. No explanation for their origins have been given.

Archmage Khadgar, aside from calling them "brutes", also referred to them as "bruisers".[5]