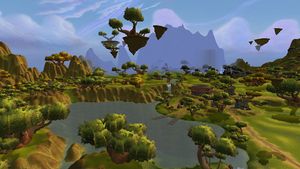 Nagrand [nəˈɡrɑːnd] ("Land of Winds" in orcish)[1][2] is a zone located in Outland. It lies south of Zangarmarsh, west of Terokkar Forest, and southwest of Hellfire Peninsula. It is the last remaining unscarred region of Outland.

In the center of the zone is the neutral town of Halaa, which can be captured by either faction. Whoever holds it will have access to a mass of amenities including active quest givers, NPCs who accept turn-ins acquired from the zone's monsters, vendors, trainers and the like. The opposing faction, naturally, is locked out of all this, which is precisely why they will be laying siege to it around the clock. See the World PvP section below for more information.

Worldofwarcraft.com says the following about Nagrand:

Nagrand is the last unscarred region in Outland. It is the ancestral home of the orcs and the heart of early orcish shamanism. Today it is a fertile retreat where elementals commune with mortals on a regular basis. Marauding ogres from the Blade's Edge Mountains, meaning to claim the territory as their own, currently pose the greatest threat to this unspoiled reserve.

Nagrand was a land that was extremely sacred to the orcs, being the meeting grounds of the orcish people, where the Kosh'harg celebrations were held twice every year. The clans would assemble at the base of their sacred mountain, Oshu'gun, and give thanks to the spirits.

The land was home to the Warsong Clan, one of the most spartan of the orcish clans who rode their wolves into battle and spoke in the language of clashing axes and the fury of battle. They shared the region with the Burning Blade Clan, and the mortal enemy of the orcs; the ogres of the Gorian Empire. In fact, the empire ruled out of the city of Highmaul in the west of the region.

During the war against the draenei, Prophet Velen and a retinue of priests made their way to Oshu'gun — the vessel that brought them to Draenor — where they were taken prisoner by Durotan and the Frostwolf clan, and eventually released (Durotan's reasoning being that the draenei allowed themselves to be taken prisoner, therefore there was no honor in holding them). When the elements abandoned the orcish people, it was here — again, in the shadow of Oshu'gun — that Gul'dan introduced the orcish people to warlock magics. Today the Mag'har, the orcs who did not partake of the blood of Mannoroth and cut themselves off from the other corrupted clans, make their home here, as do the Kurenai, Broken draenei seeking to find their destiny.

Nagrand was one of the first locations to show the signs of corruption from released fel magics including desiccation by long droughts, fertile soil turned to dust and sand that would not hold grasses or crops, and the acrid odor similar to something burning.[3] However, having largely escaped the severity of corruption seen elsewhere in the world, it became known as mag'har, "uncorrupted".[4] It remained one of the few places in the world (along with Farahlon and portions of Terokkar Forest) that looked largely as they did before the corruption of the world.

In Warcraft III: The Frozen Throne, Illidan Stormrage, Kael'thas Sunstrider and Lady Vashj managed to seize the Black Temple from Magtheridon by shutting down several dimensional gateways used by Magtheridon to bring demons from the Twisting Nether. In World of Warcraft, it is revealed that one of these gateways was actually located in Nagrand.

Varok and Thrall reuniting in Nagrand.

By the time of the Fourth War, Thrall, Aggra, and their children had already moved to Nagrand and made their home near Oshu'gun. As the war on Azeroth escalated, and Varok Saurfang escaped from Stormwind City, the old orc arrived to Nagrand in search of Thrall, hoping to convince him to return to Azeroth. Following two Forsaken assassins, Varok found Thrall in his new home. As they reunited and spoke briefly about the situation of the Horde, the two Forsaken attacked them, but the orcs managed to defeat them. With that, Thrall was convinced to return to Azeroth and help restore order in the Horde.[5]

Green and yellow grassy plains, reminding one a bit of Mulgore and/or the Barrens. Pink-channeled sky. Although the terrain of the Barrens is similar, Nagrand is greener and has a minor amount of wetland in places, as well as an overall higher presence of water. The zone's background music implies a mood of reverence, solemnity, and a certain amount of sorrow at it is now somewhat broken nature. The music contains a direct quote from the recitative part of the aria "O Zittre Nicht" from Wolfgang Amadeus Mozart's opera, The Magic Flute.

Nagrand was covered by snow during Draenor's winters (although it is unclear if Outland still has regular seasons).[6]

There are no dungeons or battlegrounds in Nagrand. However, there is plenty of opportunities for combat: the city of Halaa is constantly under siege from one faction or the other, and the Ring of Trials arena frequently sees heated gladiatorial battles. 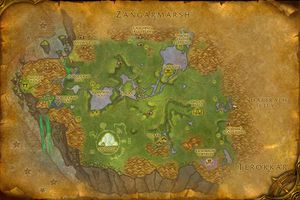 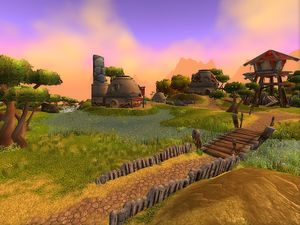 Official artwork of a ravine and a floating lake island in south-central Nagrand.

A scene from the TBC cinematic, set in Nagrand. 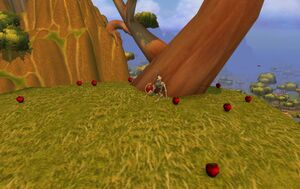 An easter egg on a floating island above Skysong Lake. Isaac Newton could not handle so many islands defying gravity.