Nat Pagle is one of the most famous fishermen in all of Azeroth. Having licensed his own line of fishing equipment, Nat can be found in several locations around the world, offering training to aspiring fishermen who seek him out.

He states he has no particular interest in fishing, but has been fishing for 20–30 years.[2] He also says that fishing is "a great excuse to drink ... heavily", and therefore he enjoys the occasional drink now and then.[3]

[45] Nat Pagle, Angler Extreme. A fishing skill of 225 and a minimum level of 35 are required to start the quest. After patch 3.1, this quest is no longer required to attain the Artisan fishing level. The quest now offers a special superior-quality fishing pole instead. If you already completed the quest, you can visit Nat Pagle to receive this fishing pole.

Prior to the Cataclysm expansion, players could obtain the quest

[60R] Nat's Measuring Tape when opening a Battered Tackle Box containing the tape, found at Pagle's Pointe in Zul'Gurub. This quest involved returning the tape to Nat. When completing this quest, he said it is his favorite measuring tape and shares information about the hydra Gahz'ranka.

[Zulian Mudskunk] in order to be used. Zulian Mudskunk were caught in Zul'Gurub itself by fishermen with 300 skill or more. This Zul'Gurub boss encounter was optional and could be done only once after every reset of the instance. Note: As of patch 5.4.1, Pagle continues to offer to tell the player how to fish up Gahz'ranka and still sells the lure, even though Gahz'ranka was not part of the new Zul'Gurub instance after patch 4.0.3 and thus can no longer be caught.

In-game, various items besides the ones in Nat Pagle's line of fishing equipment (below) can be found. Most notorious is the book [Nat Pagle's Guide to Extreme Anglin']. It is by this book that Nat Pagle was first connected to the quest for the legendary sword Ashbringer. The last readable page contains only the words: "... And so that's where you'll find the legendary sword of the Scarlet Highlord, Ashbringer. Ain't it amazin' what you run into in an ordinary day of fishin'?"

Nat in Old Hillsbrad Foothills, back when he had more facial hair.

In the Escape from Durnholde Keep instance in the Caverns of Time, Nat is seen fishing alongside Hal McAllister in Southshore. He talks about his dreams of events that will happen in the future, like Tarren Mill being overrun by the Undead, Arthas being possessed by the Lich King and killing his father, Thrall's escape from Durnholde Keep, and Archimonde being killed by "small lights". (In that dream, he was a female night elf.) He also describes two gangsters named Tigule and Foror inventing [ice cream], and eventually entering a dimensional gate. McAllister scoffs at every dream, which ironically all are to come true in real life.

The Gods of Zul'Aman

Starting in patch 2.3.0, Nat is involved in the

[36] This Old Lighthouse), which ultimately has players fighting Tethyr, a Level ?? Elite (Boss) Sea monster, with the help of some guards from Theramore.

Nat's appearance begins with the quest

[36] Is it Real? offered by "Dirty" Michael Crowe. Nat offers

[37] Nat's Bargain. After accepting the quest, apply the [Pagle's Fish Paste, Extra Strength] he gives you, then swim southwest to the wrecked ship. Swim around until a level 37 Lurking Shark aggros, then swim back up to Nat to complete the quest.

After completing Nat's Bargain, he offers

[37] Oh, It's Real directing players to Major Mills near the docks of Theramore.

Nat Pagle, as every fisherman, is very sturdy and remains untouched by the Shattering and Deathwing. Also, his [Arcanite Fishing Pole] that he donated for Booty Bay's fishing contest is now more unique in terms of look.

[85 Daily] The Protectors of Hyjal and also occasionally makes an appearance on the Darkmoon Island at the Darkmoon Boardwalk overlooking the sea.

Nat makes an appearance at Anglers Wharf, off the southern shore of the Krasarang Wilds. He has affiliated himself with the Anglers alongside his buddy John "Big Hook" Marsock. He reprises his role as a fishing trainer but is also the Anglers' quartermaster.

Nat Pagle is asked to join the Garrisons of the Horde and Alliance in Frostwall and Lunarfall from Pandaria. He can also become a follower.

The consummate fisherman and lover of fine alcohol from across the land, Nat's irascible exterior belies a love of teaching.

He is also involved in the following daily quests on Pandaria which increases his reputation by +600:

In order to have Nat in your Garrison, you must complete the following:

Once he is a garrison follower, additional quests also increase his reputation by +350 and you can collect Nat's Lucky Coins:

Gossip
If you ask me, the best part about fishing is its slow pace. It gives one time to think, to reflect on past events and to plan for future ones.
Oh, and it's also a great excuse to drink. Heavily.

Nat Pagle says: Out of nowhere, some 300 foot tall demon or somethin' walks up and stars climbin' the tree...
Nat Pagle says: And if that weren't crazy enough, that big demon gets killed by a bunch of little floating light things... Oh, I was also a female elf in that one... Yep...

Nat Pagle says: Well in this dream, they somehow end up inventing something called [ice-cream] and flavoring it with strawberries... Well, long story short, they end up striking it rich!
Nat Pagle says: If that weren't crazy enough, they decide to quit ice-cream business and become adventurers... They travel all over the place and finally disappear into some portal. I woke up in a cold sweat after that one...

Nat pats his brow dry.
Nat Pagle says: But tragically, Arthas is consumed by the evil and becomes evil himself...
Nat Pagle says: Well, he comes back to the king all pretendin' to be nice, draws his sword, and runs the king through, elbow to... well you know... kills him on the spot.
Hal McAllister shakes his head.

Nat Pagle says: Tarren Mill is destroyed by some crazy force of undead and forever more becomes an enemy to Southshore.
Nat Pagle says: Could ya imagine such a thing, Hal? Could ya?

Nat Pagle says: He ends up destroying the whole keep, freeing all the orcs we're keeping in the camps, and rising to power as the king of orcs... Warchief or somethin'.
Nat Pagle says: Crazy, isn't it?

After each dream, Hal McAllister replies to him with one of the following:

Gossip text
A fellow angler I see! I have a variety of gear from these local fisherman[sic], just let me know what you need!

Hello fellow angler! Have you been around these parts long? Me and my buddy "Big Hook" here travel far and wide looking for the next big catch!

We ran into this place by accident and the locals were friendly with both their supplies and booze so we decided to stick around!

What are you waiting for? Let's catch some fish! 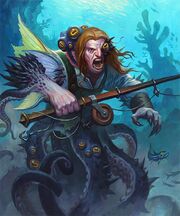 A corrupted version of Nat Pagle.

Nat appears as a legendary card in Hearthstone. His flavor text reads: "Nat Pagle, Azeroth's premier fisherman! He invented the Auto-Angler 3000, the Extendo-Pole 3000, and the Lure-o-matic 2099 (still in testing)."

A corrupted version of Nat, known as Nat, the Darkfisher, appears as a legendary card in the Whispers of the Old Gods expansion. His flavor text reads: "You can take away his humanity, but you will never take away his fishing pole."