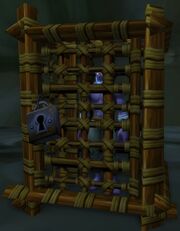 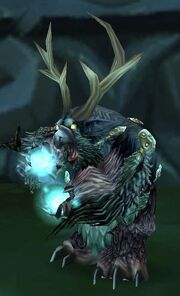 Naturalist Bite can be found in a cage near the last boss in the Slave Pens.

When you open the cage, a champion, enchantress, and soothsayer will appear. Naturalist Bite will help attack his captors if you bring them close enough.

Hey! Over here! Yeah, over here... I'm in the cage!!!
I almost made it!
I came in here to prove the existence of Quagmirran, that most mythical of fungal giants. I got my wish, sort of.
You must let me free! In return I will grant you a boon to help you to deal with Quagmirran.

"Alright, Bite, I'll let you out."
Coilfang Champion yells: Intrudersss with the prissoner! Kill them!!!
Uh oh! It would appear that all of the noise you've been making has attracted some unwanted attention!
Now that the rude interruption is over, as I was saying, Quagmirran is nearby!
As promised, I can fortify you with a magical boon that should aid you in your fight with him.

"Naturalist, please grant me your boon."

Being able to study and learn from the Underbog is a once in a lifetime opportunity.

To think I was practically dead not long ago sitting in a crate in the Slave Pens...

We must contain the disease the naga have unleashed here before it is too late!