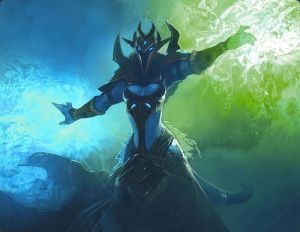 Nature magic is commonly known to be the energies of Life. It promotes growth and renewal in all things. The Wild Gods are a primal manifestation of life and nature.[1]

The nature branch of divine magic is almost entirely the province of one race. Night elves follow no faith but that of Elune, while honoring the other Ancients. Although all night elves pay tribute to Elune, those who truly hear her soft song choose the healer class and follow the path of either the druid or the priest. Most of the inhabitants of northern Kalimdor — namely the night elves, but also the furbolgs and the satyrs — worship or revere the Ancients. The night elves worship Azeroth's only deity, the eternal moon goddess Elune. They revere most of the other Ancients, especially Cenarius, the only Ancient to spend considerable time on the Physical Plane. They also honor the moon goddess’s companions, including Agamaggan, Aviana and Malorne. The furbolgs venerate the bear twins, Ursoc and Ursol; and the evil satyrs revere Lord Xavius. The Ancients rarely interfere with life on Azeroth, but these races hold fast in their fervent beliefs that the Ancients exist and are watching events unfold. Adherents from these races do not receive their power directly from the Ancients they worship; their faith allows them to tap into an inner spark, focus divine energy and cast spells.[6]

An arcane version of nature magic was studied by certain wizards who were trained outside cities. Used for ripening, culling, harvesting. One can take a seed and pull the youth from it until its a flower.[citation needed]

Although nature spells are not a specifically defined category, a spell or effect falls into this subgroup if it clearly improves, enhances or summons creatures or objects that exist in natural, aboveground terrain.[7]

In lore nature is often split into the elemental domains of earth, fire, water, and air. Though versions of these domains are also shared by the arcane casters as well.

The orcs, trolls, tauren and the draenei follow the elements, in the separate school of magic known as shamanism[8] The general difference is that divine casters access nature by natural means and peaceful worship of elemental spirits or Ancients, where as practitioners of the arcane tend to unnaturally bend the elemental-based magic to their will.

Nature is also a school of magic in World of Warcraft. For further information, see School.