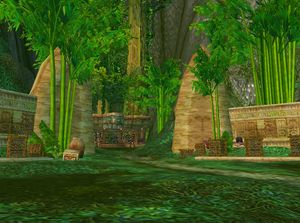 The Naze of Shirvallah is a subregion of Zul'Gurub, accessed by turning left at the first crossroads past Zanza's Rise, then turning right at the second crossroads. It is where High Priest Thekal and his minions can be found.

Much of the area was taken over by Gurubashi Villagers, and Zandalari troll members. A new rise was built here where a Zandalari Hierophant kills a villager when Mortaxx orders them to climb up.