"The struggle to free the orcish people from our tainted blood has not been easy."[1]

Nazgrel is an orcish commander, and was an advisor to the Horde's former leader, Warchief Thrall. He was originally the preeminent warrior of the Frostwolf clan.

Since the reopening of the Dark Portal, Nazgrel commands the Horde forces of Thrallmar in Hellfire Peninsula, a fortress in the world of Outland.

Nazgrel is the last living relative of Kash'drakor, a famed warrior in orcish history.[2] Nazgrel was one of the orcs liberated from an internment camp by Warchief Thrall after the Second War. Since then, he has become one of Thrall's most trusted advisors. He is distrustful of the Alliance.[3]

The Founding of Durotar 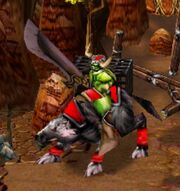 After the Battle of Mount Hyjal, Thrall took his orcish brethren to an area of the Barrens, which he claimed as his own, naming it Durotar after his father. Founding the capital of this new nation, Orgrimmar, Nazgrel was placed in charge of its security.[4]

Nazgrel despised the Alliance, and humans in particular. He viewed Thrall's continued insistence that the humans can be reasoned with to be a weakness, and felt that victory through war was the only way that the Alliance would end their persecution of the Horde. However, Nazgrel was also completely loyal to his Warchief, and thus did not act on his opinions.

During the construction of Orgrimmar, Bloodfeather, a harpy queen, assaulted the caravans of supplies coming to Orgrimmar, but Nazgrel was unable to leave the fledgling city to deal with her. Fortunately, Rexxar, a recent arrival to Orgrimmar, offered to assist Nazgrel, and was sent to dispose of her. Nazgrel was pleased when he returned with the harpy's heart, and rewarded him with items from the armory.[4]

Nazgrel was uneasy as news of the humans' actions at the coast reached Thrall, but obeyed Thrall's command for peace, letting Rexxar handle them. But when they lost contact with Gar'thok's outpost, Nazgrel accompanied Rexxar to investigate, and they found the outpost destroyed and human camps along the coast. Nazgrel, Rexxar and Rokhan proceeded to kill the humans to take revenge for their actions.[4]

Nazgrel noticed Rexxar and his bear Misha carrying a wounded orc named Byrok. Nazgrel's men helped get the orc to Thrall in his throne room. He and Burx had heard about a cult named Flaming Sword that was spreading between humans in Theramore. Its members were apparently behind the attack on Byrok. Later on, when human troops gathered at Northwatch Hold, Burx ordered Nazgrel to ready orc's troops and sent them to the Barrens.[5]

Since Admiral Proudmoore's invasion of Durotar, Nazgrel has continued to serve Thrall unquestioningly.

Nazgrel has served as Thrall's general and chief of security. It was Nazgrel's duty to protect Durotar from internal threats and anarchy. He is a grim and fearsome orc, utterly committed to his warchief and the glory of the Horde.[6]

Before the re-opening of the Dark Portal, he could be found inside Grommash Hold in the Valley of Wisdom, in the orcish capital of Orgrimmar. 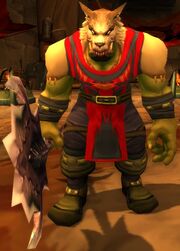 Since the invasion of Outland, Nazgrel has relocated from Orgrimmar to Outland, where he commands the outpost of Thrallmar in Hellfire Peninsula. He works as the major figurehead in the frontier town, similar to Danath Trollbane for the Alliance.

When new recruits arrived from the Dark Portal he sent them to work with Sergeant Shatterskull in order to discover what the Burning Legion was up too.[7][8] He later sent Horde adventures to strike Forge Camp: Mageddon before the Legion had gotten the camp completed and running, to destroy the fel cannons at Forge Camp: Rage before they could be fired upon Thrallmar, to slay Warbringer Arix'Amal, and close the Legion gateway at Invasion Point: Annihilator.

Upon learning of a plot to assassinate their envoy to Falcon Watch Nazgrel instructed Horde adventures to kill the assassin.[9] When the assassin was discovered dead adventures decided to bring the axe that took his life to Nazgrel. After he received the axe a surprised Nazgrel became determined to contact whoever created the axe as they were familiar in the old ways.[10] After tentative contact with the Mag'har was established Nazgrel declared that the Warchief must be informed at once and sent adventures to report the news to Thrall, who subsequently ordered them to aid the Mag'har.[11]

He personally ordered the death of Force-Commander Gorax, the Hand of Kargath, and Arazzius the Cruel.[12][13]

[Magtheridon's Head] Nazgrel revealed Magtheridon's death was a blow to both Illidan Stormrage and the Legion and that the siege of Hellfire Citadel no longer had a purpose for the Legion.[14] He then cast

[Nazgrel's Fervor], which granted 10% in Thrallmar reputation gains for two hours for every Horde character within Hellfire Peninsula and Hellfire Citadel.

When an Horde player reaches Prestige Rank 2, Nazgrel can be found in the Undercity alongside other notable leaders of the Horde standing right next to Thrall. During

So you've recently arrived from Azeroth, eh? You'd best steel yourself, <class> - there are perils in this land unlike anything the Horde has faced before. I am Nazgrel - right hand to our mighty warchief, Thrall. He honored me with the task of safeguarding this brave expedition and - by all the spirits - I shall!

Tell me more of our mission here, Nazgrel.
Once our warchief heard that the Dark Portal had reopened, he immediately gathered his advisors to plan this daring expedition. Though a few of his councilors have their doubts, Thrall holds out the hope that we might discover new insights into the history of our people. He believes that somewhere amidst the wreckage of this world, the true tale of the orcish people lies hidden.

I must admit that in my darkest moments... I fear that that tale should remain untold.

<Keep Listening>
The Horde has risked much to venture into Outland - resources, manpower - even the tactical defense of our lands is at stake. Despite all else, Thrall believes in the promise of this ravaged land. There is a strange light in his eyes these days - as if he senses some stirring revelation the rest of us do not.

Still, he is my warchief and my blood-brother. I would follow him through the gates of the abyss itself.

Hellfire Citadel is ours! The source of Illidan's fel orc army is no more! Magtheridon has fallen to the might of <name> and his allies!
The time for us to rise and strike at the fel orcs that remain is now! Do this for your Warchief! Do this for the Horde!

In the canceled Warcraft Adventures, Nazgrel was the captain of the Wolf Riders of the Frostwolf clan. Thrall had interrupted his sacred hunt of a ferocious wendigo that cost him the life of his mount, for which Nazgrel was furious, but the raider eventually accepted Thrall once he proved his worth to him. Thrall later made him general of the force that would attack Durnholde Keep.

Thrall says: No need to thank me brother. You would have done the same--
Nazgrel grunts
Nazgrel says: Fool! That Wendigo was my kill! How dare you interfere with a sacred hunt!
Thrall says: You looked like you needed help.
Nazgrel says: I needed nothing from you! I had the beast under control. A Wendigo was finally within my grasp... and you scared it away! "Grunts" Stay out of my way.
Nazgrel runs.
Thrall says: There's just no pleasing some people.

Later back at Frostwolf Village.
Nazgrel says: You! Get away from me! I lost my wolf in that fight only to have you deprive me of my kill! Now I must set this foolish trap and try to lure the beast back into the open!
Thrall says: My mistake... I thought your life was important.
Nazgrel says: My life? Are you saying I wouldn't have beaten the beast on my own?
A village Hut door opens.
Drek'Thar says: Nazgrel, save your pride for the hunt. Stranger... come inside, we have important business to discuss.

Later inside the Hut.
Thrall says: I know that you still doubt me, brother... But I won't let you down again.
Nazgrel grunts.

In Warlords of Draenor, an alternate universe Nazgrel appears as a small child. Because orcs reach the size of an adult human by age six,[17] he must be less than six years old here. Warlords of Draenor takes place around year -2,[18] meaning Nazgrel was born no earlier than year -8. Assuming the prime Nazgrel was born at the same time as in the alternate universe, he would be between 33 and 39 years old when the Iron Horde invaded Azeroth.

Although "Nazgrel" is one of the random names for far seers in Warcraft III, this is likely to be just a homage to the character from Warcraft Adventures. He is listed as a shaman in the Trading Card Game, perhaps mistakenly due to this appearance, or perhaps due to his shaman-like garb (which seems instead to be a traditional Frostwolf garb in his case). His father, the warrior Kash'drakor, is also seen with a similar garb.

It is unknown whether or not Nazgrel gave full support to Warchief Garrosh Hellscream's hyper-aggressive moves against the Alliance as Nazgrel has not been mentioned since The Burning Crusade.