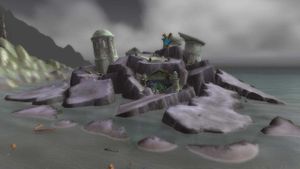 Nazj'vel is located far south off the coast of the Twilight Shore in Darkshore and is home to the naga.

Azerite began to crop up all over the island around the same time as the Burning of Teldrassil.[1]

During the Battle for Darkshore when the Alliance controls the zone, Nazj'vel is taken by Bilgewater goblins who use their machinery to mine Azerite. The entrance to the cave has been collapsed, but a pile of explosives is found in front of the rubble, indicating that the goblins intend to re-enter it. When the Horde is in control of Darkshore, Nazj'vel is taken by Gilnean worgen who destroyed the goblins' machinery. Adventurers are sent here to defeat enemy factions.

The exterior of Nazj'vel is a night elf archaeology dig site.