Nazmir (pronounced "NAHZ-meer")[1] is one of the three regions of Zandalar, and was once the shining heart of troll civilization. Nazmir is now a fetid swamp riddled with ruined monuments to its lost glory. Its vile inhabitants, the blood trolls, have pledged their savage hearts and frenzied minds to the Blood God G'huun. They must destroy the last functioning titan disc, a relic that lies at the very heart of Zuldazar, to free their master from eons of confinement within the titan facility of Uldir.[2]

Nazmir was once a lush forest, but during the Cataclysm Nazmir started to sink into the sea. Now, it is a fetid swamp full of ruined buildings and infested with blood trolls. It harbors ancient titan secrets in a top security facility to study the Old Gods, as well as a tool to destroy all life on the planet. The Horde will have to enlist the help of the loa to combat these threats.[3]

It is implied that Nazmir was once the center of Zandalari civilization with the city of Zul'Nazman,[4] but they moved south into the mountains to avoid G'huun.[5] The first king of the Zandalari, Dazar, led an exodus of his people out of the muck and mire and built a city of gold.[6]

Once the shining heart of troll civilization, Nazmir is now a bleak swamp riddled with ruined reminders of its former greatness. In the current troll capital of Zuldazar, stories are passed down from generation to generation cautioning children to behave, lest Nazmir's twisted practitioners of blood magic come to snatch them from their beds. And those who dare brave the swamp have a terrible habit of disappearing, never to return. The blood trolls of Nazmir are the monsters that haunt every Zandalari child's nightmares — and for good reason,[7] as they are dedicated to the worship of the Blood God G'huun and to a single-minded purpose: the destruction of the last functioning titan disc within the city of Zuldazar. Should the trolls shatter this seal, G'huun will be freed from its eons-long confinement to rule the world. Upon arriving in Nazmir, you will meet Princess Talanji, who will ask you to escort her as you look for signs of blood troll activity in the area.[8]

Nazmir is a primordial swampland, replete with a diverse ecology of insects and dangerous beasts. Many of the once grand temples and buildings now lay in ruins, scattered throughout the region like broken teeth. Vegetation has encroached upon the stone walls and buildings, reclaiming the land piece by piece. Sodden marshes and tributaries mark the landscape of Nazmir, fed by the grand waterfalls spilling from the cliffs of Zuldazar high above. The Razorjaw River and Shattered River both wind through Nazmir as well, contributing to the marshes and wetlands that dominate the region. A vast coastline surrounds Nazmir to the north and east, with the Shattered River demarking the southern border along Zuldazar. To the west you'll find the bubbling Shoaljai Tar Pits, where the cloying scent of smoke drifts up from vents within the earth, choking the air with a haze of ash and dust. Just west of the tar pits on the westernmost border, the pathway into the arid desert of Vol'dun awaits.[7] 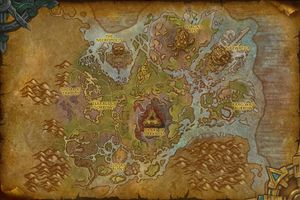 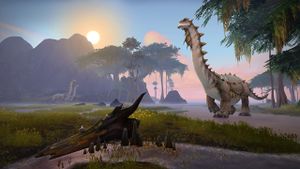