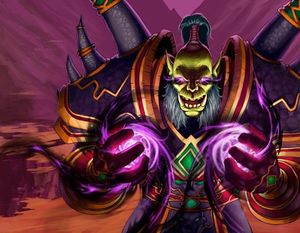 "Gul'dan's weakness was in his ego, not his area of study."

Necrolytes are a type of necromancer who use the dark energies of the Void,[1] as it was discovered by Natalie Seline. As such, they sometimes overlap with warlocks and shadow priests in their depiction.

The first necrolyte to walk the world of Azeroth, Sataiel, was given the scythe known as Ulthalesh, the Deadwind Harvester, by the titan Sargeras himself.[2] Sataiel is also sometimes just described as the first necrolyte in other sources.[3]

With Kil'jaeden's help, Gul'dan has formed a group of orcs called necrolytes. They dedicated themselves to learning the dark arts of necromancy. Through it, they would be able to spread plagues to the draenei and raised the dead to fight at the Horde's side.[4][5] 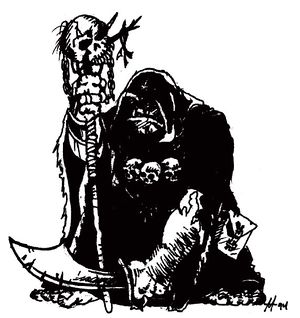 During the First War, the main purpose of the necrolytes was to bolster the orcish forces with undead troops, similar to the necromancers of the Scourge decades later. While necrolytes did possess other magical abilities, they were quite paltry when compared to those of the other orcish warlocks. Their spells included Shadow Spear, Raise Dead, Dark Vision, and Unholy Armor.

Unfortunately for the necrolytes, the rise of Orgrim Doomhammer was a precursor to their downfall. Doomhammer slaughtered the majority of the necrolytes while Gul'dan was in a psychic coma. Once Gul'dan awoke, he begged Doomhammer to spare his life, promising him to create a host of spellcasting undead riders capable of combating the human mages. The remaining necrolytes, who were incapable of imbuing corpses with consciousness, weren't up to the task, which frustrated Gul'dan. He did nevertheless see potential in them, but not while they were among the living. Gul'dan and Cho'gall ritually sacrificed almost all of them.[6][7]

Gul'dan and Cho'gall went on to create the death knights. Each newly-risen death knight was given a jeweled truncheon through which it could better focus its powers. Into these jewels were infused the raw, necromantic powers of the freshly slain necrolytes.[8]

Orcish necrolytes were not gone for good, as some remained within the Stormreaver clan, surviving their ordeals on the Broken Isles. An unknown warlock coven in Durotar, who Stormreaver necrolytes were a part of, stole an ancient artifact from Morg Wolfsong and his fellow shamans but was eventually destroyed by Rexxar. 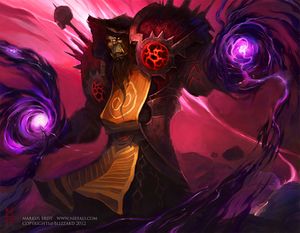 The Scourge employ many necrolytes but also necrolords, who could be advanced forms of necrolytes. In the alternate Draenor the Shadowmoon clan is also depicted as having several masters of the necromantic arts, including necrolytes, a reference to their original description as "practitioners of the Orcish religions".[9]

Affliction warlocks are also shown as having abilities like

[Secrets of the Necrolyte] while also being able to use

Necrolytes first appeared as a unit of the Orcs in Warcraft: Orcs & Humans. They were described as such:

Necrolytes are practitioners of the Orcish religions. These binders of souls command the black powers that hold control over the earth. Linked into the dominions of the lower plains, Necrolytes have power over all things dark and evil, including the raising of fallen warriors to create armies of the undead. Through ceremonies performed at their Temples, they learn to warp the essence of shadow to use for their advantage.[9]