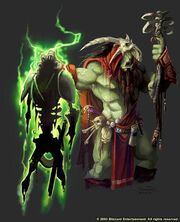 “That is the good thing about necromancers--we never let anything go to waste.”

Necromancers are practitioners of necromancy (also called the dark arts[2][3] or the black arts)[4] the study and use of magic to raise and control the dead.[5] Necromantic magic (or death magic) has many functions beyond simply raising the dead. Masters of this tainted field of magic can conjure festering diseases, harness the shadows into bolts of incendiary energy, and chill the living with the power of death. Necromancy can also be used to reconstruct the flesh of undead creatures, allowing them to function again even after the foul monsters have been destroyed.[6] Necromancers are the enemies of life itself, and all hands are raised against them. Some of the worst evils in Azeroth's history have been perpetrated by necromancers, and they deserve their malevolent reputation. Few things are as abhorrent and horrifying as necromancy.[5]

During the War of the Ancients, the Burning Legion started to experiment with creating an army of unliving, but Kalimdor was probably not the only place that they've been attempting this.[7] The nathrezim, also called dreadlords, were found animating the dead by the orc Broxigar. When Illidan Stormrage found out that the eredar warlocks could raise the dead, he actually found himself admiring the audacity of the demons.

After the Great Sundering, Hakkar taught the Atal'ai trolls necromancy for their unwavering loyalty.[8]

The troll Zanzil was exiled from the Skullsplitter tribe for using his necromantic poisons on several of his unsuspecting fellow trolls, but his exile has not been the punishment that his kindred had hoped. Indeed, since that time, several witch doctors have joined Zanzil. With their assistance, he has built up an undead army that is loyal to him alone.[9] It is well-known that his toxic elixirs can even rouse the dead from their graves.[10]

The Shadowpine troll priests must have been trying to bolster their numbers through necromantic means (they were raising mummies). Juju is an object that that is derived from a life force, a spiritual power, called E'ko[11] and houses an unknown power source. Deathstalker Maltendis believed that Shadowpine troll priests used the unknown power source within

In the aftermath of the Lich King's defeat, the Icetusk tribe of ice trolls was formed by Drakani Death-Defilers. The group settled upon a chain of islands known as the Dread Chain. In order to survive, the Icetusk turned to necromancy, with many of their dead having been risen as servants. They mined Azerite along the isles, and came into conflict with adventurers looking to do the same.[13]

The ogre magi were originally a small band of extremely loyal ogre enforcers, transformed by Gul'dan into scheming and malicious sorcerers. By warping and twisting the elf-magiks of the Runestone at Caer Darrow, Gul'dan was able to infuse the magical abilities of long dead warlocks into the bodies of these unsuspecting hosts. Once hulking simpletons, the transformed ogre-magi can direct their death magiks as easily as their lesser cousins would deliver a crushing blow to any foolish enough to stand in their path.[citation needed]

The Gor'vosh ogres found on alternate Draenor practice necromancy as well, where they raise the dead in the Ashmaul Burial Grounds. Their connection to the Shadowmoon clan and the Shadow Council is unknown, so it is not known if they were influenced by either group or if these ogres discovered necromancy on their own.

Rise of the Shadow Council 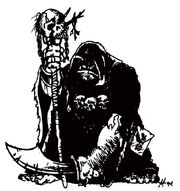 Ancestral worship has long been at the heart of orcish religion. While nearly all of the orcish Horde believed that their dead elders watched and guided them from the depths of some lost realm of chaos, Gul'dan believed this notion to be a product of ritual and not reality. Within the Twisting Nether, Gul'dan discovered that the spirits of the dead do linger on, floating on the astral winds between the worlds. Gul'dan knew then that these spirits of the dead would be a useful tool for anyone who could bind them to his will.[citation needed]

Knowing that the time had come to claim the mantle of power that Gul'dan had so long neglected he quickly gathered together the few warlocks who had shown some spark of passion and desire to rise above the petty quarreling of the clans. To these warlocks Gul'dan bestowed the knowledge of the dead by leading them in secret rituals and communing with the spirits of the Twisting Nether. Those who were incapable of channeling this power were destroyed. After a time a pact was forged between the members of the warlocks' circle and the dark spirits whose energies they had learned to invoke. Gul'dan would use his place among the warlocks to shape the thoughts of others while, cloaked by a veil of secrecy, they would be immune to the caprices of the bloodthirsty masses. Thus did the Shadow Council come to be.[citation needed]

In pursuit of furthering the Shadow Council's magical resources, Gul'dan opened a new school of magical discipline that became known as necromancy. The Shadow Council began training young warlocks in the arcane mysteries of life and death. Again, with tutelage from the demon Kil'jaeden, these necrolytes delved into the dark arts, eventually gaining power enough to animate and control the bodies of the newly dead.[14]

By the time of the war against Deathwing, the Dark Horde would still have necromancers among their ranks.[15]

On the alternate Draenor, the warlocks of the alternate Shadow Council were desecrating the dead in the Icescar Boneyard,[16] summoning demons to inhabit the bones of the dead.[17]

Necrolytes of the alternate Shadowmoon clan employ necromancy by using the power of the Void.[18] Ner'zhul, chieftain and elder shaman of the Shadowmoon clan, sacrificed the heart and soul of his tribe in an attempt to join the Iron Horde. After failing to use the dark naaru K'ara to destroy Karabor, he retreated to his clan's ancient burial grounds, venturing ever further along a dark path, embracing the power of the Void and the necromantic arts. 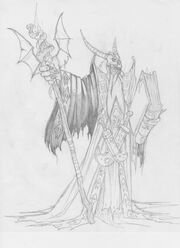 Necromancers of the Scourge are dark magi. Necromancy being highly illegal for the mages of Dalaran, the former archmage Kel'Thuzad is perhaps the most notable example of a modern necromancer. He greatly contributed to the initial spread of the Scourge and the fall of Lordaeron.[6] Many modern necromancers were trained by Kel'Thuzad and his agents in the Scholomance beneath Caer Darrow, otherwise known as the School of Necromancy. The school contains notable figures such as the lich Ras Frostwhisper, as well as the headmaster of the facility, Darkmaster Gandling. Ner'zhul, the Lich King, granted these malevolent sorcerers true power over the dead in exchange for their loyalty and obedience.[19] The necromancers continue to abound in the Plaguelands. Overseeing both the spread of the Blight and the construction of new Scourge installations, necromancers are most commonly encountered within and around the ruined city of Stratholme. An elite branch of necromancers, under the command of the dark master Maleki the Pallid, refer to themselves as the Thuzadin, in honor of their lord and first of their kind, Kel'Thuzad.

Thanks to Magus Bisp who supplied and perhaps even trained the Redpine tribe, some gnolls have also learned the art of necromancy. Moldfang is one of the first results of this.

Following the onslaught of the Scourge during the War of the Spider, many plagued nerubians have become necromancers.[citation needed]

The magically gifted mogu race practice "spirit-capture magic",[20] allowing them to capture and bind willing or unwilling spirits in constructs,[21] bend them to their will,[22] and even summon spirits from beyond the grave.[23][24] These mogu casters can also access a realm called the "Spirit Void", which is very similar to the Realm of Shadows used by the Scourge.[25] While the schools of magic practiced by the mogu does not fall within the ordinary class categories,[20] the deathspeakers and possibly the spiritbinders can be referred to as necromancers.[26] The Rajani openly call this magic necromancy, which they call forbidden and disgraceful arts.[27]

The mogu appear to have abandoned this practice at some point before the reign of Emperor Shaohao, but have resumed it in recent times.[28]

Some of the magic practiced by the mogu, like flesh-shaping and spirit-capture magic, seem to be based on magic or knowledge left behind by the Titans.[20]

The Deadtalkers once tended to the sacred burial grounds of the yaungol tribes and held funerals for fallen warriors,[29] but for unknown reasons they recently began using dark magic to defile the corpses of their former clanmates.[30]

Centaur are known to be necromancers, but it is generally frowned upon.[31]

Witch doctors of the Oomlot tribe on the Lost Isles can create zombies.[32]

As they are the servants of Life, the red dragonflight has some knowledge of necromancy as well. They are able to raise the dead as animated corpses for a short amount of time, though they take no joy in it.[33]

The Necrofin tribe of Deep sea murlocs is known to practice necromancy. Legend has it that they discovered necromancy on a series of runed tablets at the bottom of the sea.[34]

The Dark Lady, Sylvanas Windrunner, realized how valuable necromancy was to their cause. Though Forsaken heal naturally, many go to the priests of the Forgotten Shadow for "repairs". Necromancers can also free enslaved, mindless undead and research powerful spells that might one day return the Forsaken to life. Sylvanas knew she needed necromancers to heal, strengthen and replace her people, and she set about wooing necromancers away from the Scourge, mainly by force.[39]