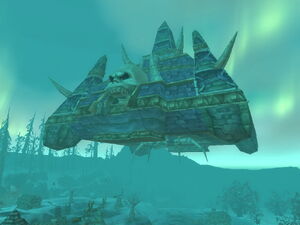 Naxxramas over the Dragonblight.

The necropoli (also pluralized as necropolises) are large floating structures used by the Scourge to transport troops and lead assaults.

The Lich King adopted the nerubians' distinctive architectural style after the War of the Spider,[1] and Naxxramas was literally torn free from the ground by agents of the Lich King.[2] It is also said that Obrahiim, the Traveler conceived both Naxxramas and Acherus: The Ebon Hold.[3] They are then summoned by acolytes.[4]

During the Scourge Invasion, multiple necropolises appeared in the skies of Azeroth, transmitting communications and other assistance to the Scourge's ground forces.[5] While the Forsaken dealt with curing the plague, the Church of the Holy Light pledged itself to destroy the necropolises.[6] Using the concentration of Light energy from the naaru of Shattrath City and the shared benedictions from its faithful, the Church created holy artifacts able to strike down the flying structures.[7]

In World of Warcraft, generic types could be seen during the Scourge Invasion, and the mighty Naxxramas could be found in the Eastern Plaguelands.

The necropolis of Acherus: The Ebon Hold was used to train new death knights and lead the assault against the Scarlet Enclave. It was stated to be even more powerful than Naxxramas.[8] However, Acherus was taken from the Lich King by the Knights of the Ebon Blade.

Meanwhile, Naxxramas moved to the Dragonblight, in Northrend, where many other necropoli can be found, notably in the Borean Tundra and Zul'Drak. The Scourge had also begun construction of Malykriss: The Vile Hold in Icecrown, as a replacement to Acherus. Being made entirely of saronite, it would have been even more difficult to destroy, but its construction was interrupted before completion.[9]