Neeru Fireblade was a level 37 quest giver located in the Cleft of Shadow in the orcish city of Orgrimmar. He has an assistant named Ak'Zeloth.

This info was sent to Thrall who immediately had the leaders of Searing Blade killed. This angered Neeru, but did not take any action and proposed to wait.

Neeru volunteered to aid Garrosh Hellscream in anyway he can. 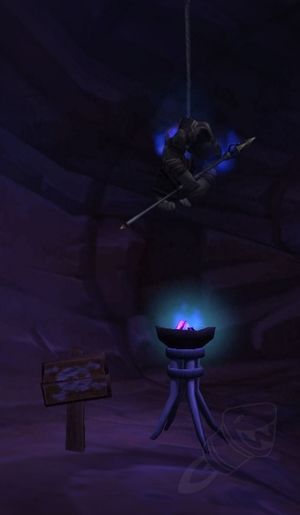 With Garrosh angered by the fact that demon worshipers are found in Orgrimmar, he has sent the Kor'kron along with Ureda to take care of them. Neeru and the other warlocks were trapped in their tents.

Later, during the siege, he was hanged on the Chasm's ceiling along with other warlocks.

His former spot is now occupied by Arnak Fireblade.

Neeru Fireblade has perhaps the most dangerous position of any Burning Blade member: He sits under Thrall's nose in Orgrimmar, claiming to be a warlock who aids the orc leader, but really working to do the Burning Blade’s bidding right in the heart of the Horde. He leads the Burning Blade regiment that inhabits a cave complex just outside of Orgrimmar, and they work to watch the Horde’s movement — and see if Thrall plans to move against them before they have a sufficient defense.

Neeru is one of the youngest Burning Blade members, and still in his healthy prime — instead of corrupted and twisted by years of fel magic. Since he wasn’t in the First War, and only tasted the end of the Second War, Klass Metalfist doesn’t trust him as far as he could spit a dead rat. He put Neeru in charge of the orcs in Durotar, but there are a handful of warlocks who know they must watch Neeru in turn. Neeru is fed carefully modified information in case he does cave in to Thrall. If Klass has his ultimate wish, Thrall will swallow the misinformation, then kill Neeru as a traitor, fulfilling two goals.[1]

Listen closely to what you are told and do not quickly trust, or distrust. For even friends serve their own ends, <class>.

Our great Warchief knows this, and to prove that there are warlocks within the Horde who do not wish to destroy it from within or gain control over it, I have volunteered to aid our young leader in anyway I can.

Judging by the last name and how much younger Neeru looks compared to Xerash Fireblade, he might be Xerash's son. He may also be related to Arnak Fireblade who replaced him after his death in Orgrimmar.