“In this world where time is your enemy, it is my greatest ally. This grand game of life that you think you play in fact plays you. To that I say... Let the games begin!”

Nefarian was the eldest son of Deathwing[5] and his Prime Consort Sintharia. Like his father and his sister Onyxia, he had a human guise, appearing as Victor Nefarius, Lord of Blackrock. Holding the Blackrock clan and various clans of ogres under his control, Nefarian ruled from his lair at the top of Blackrock Spire until he was defeated by champions of Azeroth. Upon the return of his father and the Shattering that resulted, Nefarian was brought back to life as a rotted abomination, and descended further into Blackrock Mountain, where he set up a laboratory full of new (and mostly failed) experiments - including reanimating his sister Onyxia. Ultimately, he was destroyed once again by Azeroth's champions. 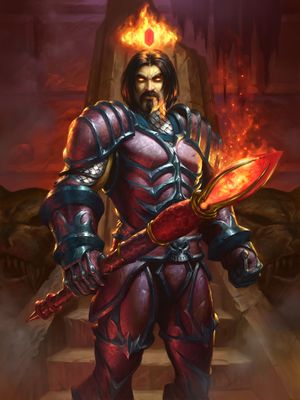 Since Deathwing's departure to Draenor during the aftermath of the Second War, his eldest children have arisen to lead their brethren and recoup their failing numbers. Deathwing's eldest son, the malicious and cunning Nefarian, has claimed the burning fortress of Blackrock Spire — and Blackwing Lair as his aerie as Deathwing commanded.[6]

Nefarian has been experimenting with the blood of all of the various dragonflights to create a chromatic dragonflight of unstoppable warriors. In this task he has succeeded his father, and aided by his sister, he plans to use them to rally the Black Dragonflight to his command.

In Blackrock, aided by his loyal dragonspawn, he fights a constant battle with Ragnaros and his forces for control of the mountain, and ultimately control of the entire region. To this end, he made efforts to bolster his forces like his father Deathwing in ages past. Nefarian delights in capturing Ragnaros' elemental minions and using them for his own insidious purposes.

He has struck up an alliance with Rend Blackhand, though he only uses him and his Dark Horde to further his own goals. Nefarian's mad bid for dominance has even attracted the ire of the red dragonflight — in the form of the red dragon Vaelastrasz — which has always been the Black flight's greatest foe. Though Nefarian's intentions are known, the methods he is using to achieve them remain a mystery.

With the black dragonflight once again under solid leadership, and with the support of these new chromatic dragons, he plans to strike back against the other dragonflights, as well as the mortal nations of the world. 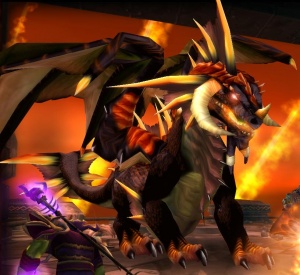 Nefarian in World of Warcraft. 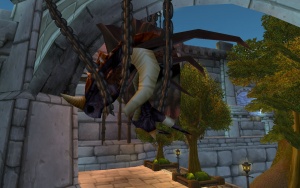 Nefarian's head hanging from the gates of Stormwind.

Within the mountains of Blackrock, Nefarian worked tirelessly to keep his kin alive and create a new flight. Rend Blackhand was the first to use a Chromatic being known as Gyth. Upon the arrival of the adventurers of Azeroth in Upper Blackrock in the arena, the son of Deathwing implored his new experiments alongside Rend's orcs to kill them. Plan fails briefly and orders Rend to deal with the heroes personally with Gyth at his side. After Rend and Gyth fell before the might of the Alliance and Horde adventurers, Nefarian promises that the next time they would meet in close quarters combat it shall be the last.[7]

In the lair of Blackwing, Nefarian is corrupting the red dragon Vaelastrasz and commands him to kill the heroes of Azeroth.[8] Shortly after the death of the red dragon, in Blackwing's hands is a shard of potential use. If the heroes of Azeroth fails to obtain it from him, he will leave a note on his desk.[9] Upon arriving in his lair, it was time for the son of Deathwing to fight back against the threat. The black dragon falls before the might of the Alliance and Horde heroes.[10]

[Head of Nefarian] begins the quest The Lord of Blackrock for the Horde and the Alliance. It drops from Nefarian in Blackwing Lair. Like the

[Head of Onyxia], Nefarian's head may be delivered either to King Varian Wrynn in Stormwind for the Alliance or Garrosh Hellscream in Orgrimmar for the Horde. Wrynn will send you to Field Marshal Afrasiabi in the Valley of Heroes, while Garrosh will send you to Overlord Runthak near the gates of Orgrimmar.

Turning in the head grants everyone in the city the Rallying Cry of the Dragonslayer.

With the coming of Patch 2.1.0, it seems that Nefarian had died in-universe. Lady Sinestra, added in the patch, says during an event involving her and a Dragonmaw fel orc named Overlord Mor'ghor:

You have no doubt heard about Nefarian's failures on Azeroth...While he has fallen, the experiment continues. My master...He continues the work that his progeny began.

This seems to imply that Nefarian is dead, or at least presumed dead by the black dragonflight.

It is also implied that the adventurers defeated Nefarian, as Varok Saurfang mentions that he put the

[Head of Nefarian] on a pike. (if the player has turned in the

During the book Night of the Dragon, Kalecgos and Krasus reveal that Nefarian, the eldest and most powerful of Deathwing's children, had been slain by brave fighters. Kalec later mentions to Dargonax that Nefarian's mother, Sintharia, abandoned him to his enemies after he failed her (though considering the circumstances, it's possible that Kalec twisted the truth to try and turn Dargonax against Sintharia).[12]

Sintharia, Nefarian's mother and creator of Dargonax and the Twilight Dragonflight, was mentally unstable and referred to Dargonax as Nefarian on a few different occasions.[13] Sinestra shows spite towards both Onyxia and Nefarian throughout the novel and so one could infer that she is not referring to Dargonax with motherly love of Nefarian. At the end of the book it is assumed that Dargonax and Sinestra are both killed, however the Twilight Dragonflight continues to exist either through Deathwing's doing or through Sintharia's false demise as well as both Sinestra and Nefarian being present in World of Warcraft: Cataclysm. 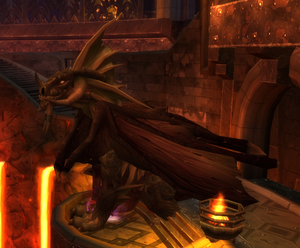 After his death in Blackwing Lair, Nefarian was reanimated with the Void magics by the Twilight's Hammer cultists in Blackrock Mountain.[14] He was charged by Deathwing to continue his insidious endeavors within Blackwing Descent.[15] Nefarian, the eldest son of Deathwing the Destroyer, has been bested by the heroes of Azeroth in the past, most recently in Blackwing Lair. Hubris and arrogance have ever been the great dragon's weak points - but returning from beyond the veil of death has made him cautious. Where another wyrm might strike back with brutish anger against the tiny insects who disrupted his plans, Nefarian has retreated.

Dwelling on the lessons learned from his defeat in Blackwing Lair, he has burrowed deeper into the heart of Blackrock Mountain and rebuilt his sanctuary. The Vault of the Shadowflame, a deep pit of cascading magma, is the heart of Blackwing Descent, and the location of horrific new experiments in undeath and magical augmentation, including a triumph dear to even Nefarian's cold, wrathful heart.[16] He had continued his experiments along with his minion Maloriak, which yielded results such as Chimaeron, Atramedes, and the reanimation of his sister, Onyxia, until he was slain yet again by adventurers in Blackwing Descent.

The remains of Nefarian and Onyxia remained in Blackwing Descent for several years until after the Fourth War. When N'Zoth rose, his servants, the Darkwhisper sect, intended to raise the children of Deathwing into service of the Old God that had corrupted their father by to luring Wrathion and using his essence. The cultists led by Dark Inquisitor Xanesh and Vexiona were ultimately thwarted by the efforts of Wrathion aided by the champions that had killed the two dragon siblings years ago. Wrathion ordered the dragon remains destroyed. When it was done, the adventurers took the last remaining scales of Nefarian and Onyxia to serve as a protection against N'Zoth's corruptive power.[17] 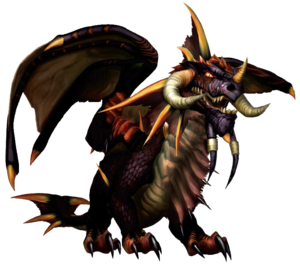 Nefarian usually enters combat in human form at first, summoning his many minions and allies while he wears down his enemies with powerful spells. If seriously threatened, he takes on his true form, using his shadow flame breath to incinerate anyone who is not properly protected. He uses his corrupted power ability to incapacitate whatever characters he feels are the greatest threat. If badly wounded, Nefarian uses his powerful magic to retreat. If prevented from retreating, he uses his most powerful spells and abilities to turn his enemies against each other, and to drain their health and spells while restoring his own. Nefarian’s breath, known as shadow flame, is among the deadliest of any dragon’s attacks. Any living target affected by Nefarian’s breath is set afire with shadow flame, taking terrible damage. The only protection from this attack is the scales of another powerful black dragon.[18] He has been referred to as Blackwing[19] and Nefarion.[20]

Intro upon entering the raid 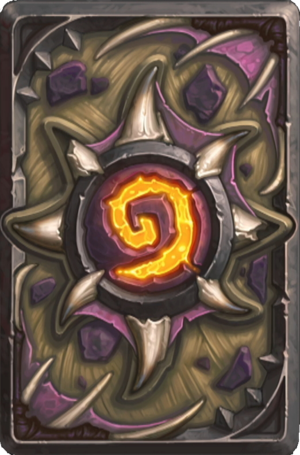 A card back themed after Nefarian in Hearthstone.