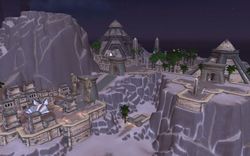 Neferset City is the capital of the Neferset tribe, a faction of tol'vir, found in southern Uldum. The Neferset have sworn allegiance to Deathwing in exchange for returning to their immortal stone selves, which many tol'vir lost to the Curse of Flesh. The people of Neferset are in conflict with the people of Ramkahen and now kill their tol'vir brethren, looting tombs and searching for a powerful artifact for their master. The city and its people are ruled by Dark Pharaoh Tekahn. Neferset City is the seat of their power, and the Ramkahen have assembled their troops within the Neferset City Outskirts to the north in order to make a final, destructive assault against their brethren in an attempt to stop them and thwart Deathwing's plans. With the help of adventurers, the Ramkahen are able to defeat Dark Pharaoh Tekahn and take control of Neferset City.[1]

What survivors remained of the Neferset headed for the Lost City where they made their new seat of power, with the help of Siamat.

By the time of the events of the Black Empire Campaign, the city was under the control of the Ramkahen and Uldum Accord.

After players complete the quest

[84] The Fall of Neferset City, the entire area is phased and taken over by Ramkahen Legionnaires.