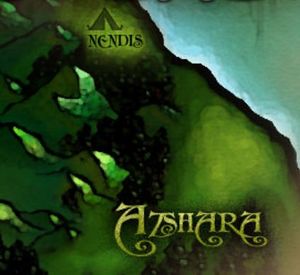 Nendis was a night elf seaport town in the Azshara region of Kalimdor. The town was razed by the naga on orders from Illidan, who used the port to escape to the Broken Isles. Maiev Shadowsong and the Watchers left the razed town in pursuit of Illidan without searching for survivors.[1]

There is no sign of Nendis in World of Warcraft. One can speculate that it was either washed away by the ocean or simply forgotten. It was on fire when it was last seen, so the naga may have just completed their task thoroughly.

Another possibility is that it is somewhere on the strip of coastline extending from Moonglade on the Kalimdor continental map, which is not a part of the zone in-game. Even with the reshaping of Kalimdor, and the possibility to use flying mounts in the old continents in Cataclysm, Nendis has not shown up.

As it was located rather north in Azshara, it's also possible that it was actually located in southeastern Winterspring. Any ports (such as Nendis) would however be located at a much lower elevation than the rest of the zone, as Winterspring - and the mountains that surround it - stretch high above ocean level. However, the eastern base of Winterspring is green with forest and may have been a location of the town.