For the character from the main universe, see Ner'zhul. For information on how to defeat Ner'zhul in World of Warcraft, see Ner'zhul (tactics).

"Our fate is written in the stars, and the stars are within my grasp."[5]

Ner'zhul was the warlord of the Shadowmoon clan and the ruler of Shadowmoon Valley. An influential elder shaman with intelligence and cunning beyond his peers, he crafted far-reaching machinations.[5]

Ner'zhul is one of the titular warlords in World of Warcraft: Warlords of Draenor as well as the final boss of the Shadowmoon Burial Grounds.

For years untold, the Shadowmoon clan divined wisdom from the stars over alternate Draenor. Orcs from far and wide called on the clan for prophecies, and the Shadowmoon chieftain, the shaman Ner'zhul, was known for his ability to communicate with spirits.[5]

Though Ner'zhul was contemplative and forward-thinking, his vision of a united orcish culture was eclipsed by the manipulations of Gul'dan and the bloody reality of the rising Iron Horde. His clan, the Shadowmoon, always looked reverently to the stars to guide their fellows. Thereafter, the mysticism of these death-sages nudged Draenor closer to obliteration.[6]

When the Iron Horde began its march across Draenor, Ner'zhul was given an ultimatum by Grommash Hellscream, to join him or die. Although he had no desire for war, Ner'zhul joined with the Iron Horde in order to save his clan. But Grom had no interest in the Shadowmoon's traditions of astrology, death-speaking and prophecy; he ordered Ner'zhul to provide a worthy form of power or else he would decimate Shadowmoon anyway. Ner'zhul, with the fate of his clan on the line, broke the ancient Shadowmoon laws and called on the power of the forbidden Dark Star, gaining mastery over the Void.[5][7] Ner'zhul's wife, Rulkan, disapproved of this decision, and she and several other like-minded members of the Shadowmoon left to form the Shadowmoon Exiles.

The war on Draenor

Ner'zhul and his Shadowmoon clan were among the Iron Horde defending the Dark Portal from the Alliance and Horde offensive. His clan was active within the Umbral Halls, to where he was called by his lieutenant Keli'dan. He destroyed the cave in an attempt to kill Khadgar and his fellow attackers. He later overlooked the assault along with the other Warlords of Draenor as Grom ordered the combined army after the destroyers of the Portal. 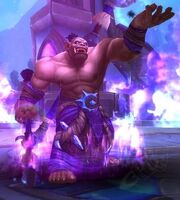 The Shadowmoon Clan under the Iron Horde was assigned with attacking the sacred Temple of Karabor. Although the Shadowmoon had co-habited peacefully with the draenei for centuries, they had to agree.

After several encounters with the draenei, including Vindicator Maraad[8] and the Prophet Velen himself, Ner'zhul began preparations to summon the Dark Star in a clearing in the heart of Shadowmoon Valley. He planned to use it against the draenei in the Iron Horde's siege of Karabor.

When Yrel and the commander of the Alliance forces arrived to stop him, Ner'zhul summoned his ancestor's spirits, loudly declaring that he would sacrifice even them to save his clan from the wrath of Hellscream. When Velen offered to help Ner'zhul so he could restore his clan to its peaceful ways, Ner'zhul revealed that the shadows of the void had already taken his soul. He fought with Velen, but left once the summoning of the Dark Star was complete. However, Velen released his energy and sacrificed himself to purify the Dark Star into its original form: the naaru K'ara. With his trump card lost, Ner'zhul and his clan fled to the Shadowmoon Burial Grounds.

After Ner'zhul's best shaman and their minions were slain, Ner'zhul was defeated at the Edge of Reality.