For the vulpera, see Neri.

“Neri was the first of the kelfin to escape, she unified the Unshackled and made a home for them.”

Neri Sharpfin is a gilgoblin and the leader of the Unshackled.

Neri was the first gilgoblin to escape the naga of Nazjatar. Following her escape, she would unite her fellow kelfin, makrura, and even sea giants as the Unshackled and make a home for them.[1] After the Horde and Alliance fleets were destroyed by the naga, Neri would observe the Horde forces and seeing that they were enemies of the naga, and thus potential allies, she aided Lor'themar Theron, First Arcanist Thalyssra, and the Speaker of the Horde.[2] She directed the Horde forces to Newhome, however en route the group was confronted with an astral projection of Queen Azshara. The queen boasted that Nazjatar would be the last thing they would see and promised that she would hold the waters around Nazjatar at bay as long as she remained entertained. The encounter and Azshara's anger towards the two elves surprised Neri.[3]

With the changes to Nazjatar, Neri discovered that the Unshackled had become exposed to the naga and subsequently moved the injured deeper into the cave. To further protect her people, she directed Telur to move the calling conch deeper in the cave.[4] Revealing that some of the scouts hadn't returned from their spying mission, Neri enlisted the Speaker to help her discover what became of them. To her sorrow, she discovered her friend Nelu Darkclaw was dead and witnessed the death Sandel Fin. However, she was grateful to have been able to save Poen Gillbrack and his makrura friend Mak.[5][6] With her people better secured, Neri volunteered to join the Speaker on their adventurers.[7]

Seeking insight into Azshara's forces, Lor'themar turned to Neri,[8] and Neri with the Speaker would set out against them in order to rescue enslaved members of the kelfin.[9] She and the Speaker fought side by side against the naga and discovered that naga were using Azerite weapons, that Lor'themar revealed were crafted by Lady Ashvane.[10]

As the trust between Neri and the Speaker grew, she revealed secret areas of Nazjatar to her new friend. After learning so much by the Speaker's side, Neri revealed she had spent so long fighting the naga that she had almost lost hope but now she saw a way out of the darkness. In gratitude she gave the Speaker the

[Snapdragon Kelpstalker] she had trained from a pup, remarking that she'll make a good mount and a loyal friend.[11] 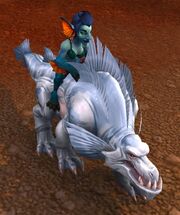 Following the Nazjatar Campaign, Neri, accompanied by Vim Brineheart, Poen, Mak, and Pronk, arrived in the Dranosh'ar Blockade in Durotar.

I won't stand by and let the naga wipe us out.