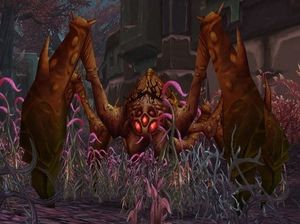 Spiderlings are nerubian young. They are hatched from the eggs of queens in breeding pods,[1] as well as upon the death of some living adults.[2] They can also hatch from unfortunate captured creatures.[3]

World of Warcraft: Wrath of the Lich King introduced several new forms of nerubian. Although not identified ingame, one is called 'NerubianSpiderling' in the game files. These "spiderlings" do not appear to be nerubian young (unless some kind of metamorphosis occurs), as they have no humanoid section, and no abdomen. They are capable of speech[4] and can be either workers or soldiers. This incarnation may be some kind of subservient subrace or caste.

Nerub'ar Broodlings in Icecrown Citadel are the only small World of Warcraft mobs that use the standard nerubian model, and look like Warcraft III's spiderlings.

[Nerubian Relic] has a chance to drop from Anub'arak in Trial of the Crusader. 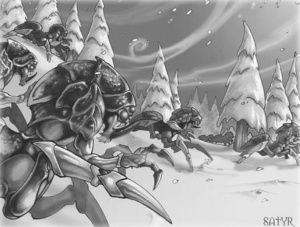 Spiderlings are young and voracious nerubians. While not nearly as intelligent as adult nerubians, spiderlings are still dangerous; in fact, when they gather in swarms (which they often do), they are more dangerous than nerubian workers. Adult nerubians carry their young around their lairs. Up to around a dozen spiderlings cling to the adult's body. Nerubians leave the spiderlings in their lair when they move to confront enemies, but foes who clash with nerubians in their tunnels may find themselves confronting a spiderling swarm. Nerubians are spiderlings for about 3 years. At this point, they are adult nerubians. Like young creatures of other races, spiderlings have a limited command and understanding of their native language, Nerubian. Spiderling swarms are almost always attached to adults; the only other way an adventurer can reasonably expect to run into a spiderling swarm is in a nerubian incubation chamber. Spiderlings follow the commands of other nerubians, particularly the adult to which they are attached. Once the nerubians have destroyed or routed all opponents, the spiderlings feed.[5]

Many nerubians utilise insects as an attack, such as the crypt lords' carrion beetles and locusts. These may a form of expendible young, created as clones through asexual reproduction. Some spiderlings may fall into this category; namely those that spawn on the death of adult nerubians.

If this is the case, undead nerubians retain their ability to clone themselves, as crypt fiends and lords can still attack with barrages of insects. Alternatively, nerubians might form some sort of symbiotic relation with a variety of non-nerubian insects, carrying them with them even in undeath.

For the in-game creature, the name "nerubian spiderling" is taken from the game files, as no other name is known.