The nerubian spiderlords (also known as Spider Lords)[1][2] are a type of nerubians that look like a mixture of beetle and spider,[3] and were once the mighty kings of the subterranean spider kingdom of Azjol-Nerub.[4]

In undeath, they become a kind of crypt fiend called a crypt lord. The only living spiderlord seen in World of Warcraft has been Vorus'arak, leader of the Voru'kar. 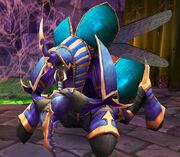 Nerubian spiderlords are cold, ruthless, deadly, and intelligent beetle creatures. They are perhaps the most powerful nerubians. Spiderlords once formed the majority of Azjol-Nerub’s leadership in Azjol-Nerub; they were the keepers of law and dominated nerubian society, though the eldest members of other castes held considerable sway.[5] In the largest communities, they still serve as advisors to a local queen. Small communities are led by spiderlords.[6] They exhibit more callous intelligence than their underlings; a nerubian spiderlord is willing to sacrifice almost anything to further one of his complicated schemes.[5]

These nerubians look somewhat different than their brethren: they have a carapace and dual sets of wings, making their lower bodies appear almost beetle-like. This enormous, insectile creature resembles a gigantic, fantastically colored beetle. The scarab-like carapace unfolds like dual wings, and the creature’s front limbs are scythelike and bony. Nerubian spiderlords come in many vivid, jeweled shades, everything from emerald green to sapphire blue to ruby red. Some scholars attempt to draw a correlation between a spiderlord’s coloring and his approximate power level, but so far have reached no consensus. Nerubian spiderlords grow 18–20 feet tall and weigh 8,000 to 12,000 pounds. Their carapaces provide excellent natural armor, but their vestigial wings are not strong enough to allow flight.[5]

They also typically grow to a larger size and train in some combination of aristocrat, warrior, and mage or other spellcaster classes. They must choose between training as aristocrats, warriors, or mages, the choice may not be changed later.[6] When challenged, a nerubian spiderlord tries diplomacy first, after which he switches to his spell-like abilities. Melee combat is a spiderlord’s last resort. A nerubian spiderlord possesses the same poisonous bite of other nerubians, but due to his scarab body he cannot spin webs. They can spin a single strand to ascend or descend in order to climb, but they cannot throw webs like common nerubians.[5]

Only nerubian queens give birth to spiderlords; one out of every twenty eggs she lays on average grows into a spiderlord (the rest emerge as regular nerubians).[5]