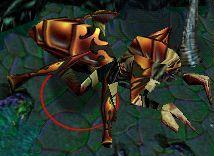 A Nerubian Webspinner from Warcraft III.

Nerubian webspinners are nerubians who practice from a young age in creating and shaping webs, raised on a special diet to encourage quick web production. Many webspinners practice like archers, perfecting the valuable technique of casting over distance, particularly at aerial targets.[1] Webspinners can also throw a web several times per day. This is similar to an attack with a net, but it has a maximum range of 50 feet, and is effective against targets up to one size category larger than the spider. Webspinners often create sheets of sticky webbing from 5 to 60 feet square, depending on the size of the spider. They usually position these sheets to snare flying creatures but can also try to trap prey on the ground. Approaching creatures must be careful to notice a web; otherwise they stumble into it and become trapped.[2]