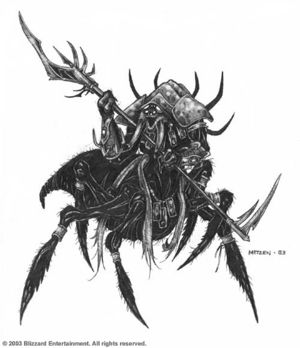 A nerubian worker from Dark Factions.

Neurbian workers are large creatures that have the lower body of a giant spider with a humanoid torso. Their arms and head are spiderlike. Their six spider legs are long and thin, allowing them to top ten feet when they rear up. Workers deal with the larger needs of the community: food, weaponsmithing, mining, building, and supplying the needs of the other castes. Their lives are unending labors, though they do not chafe at them. Unlike insects, nerubian workers need to rest; in the Sundered Monolith, workers sleep in small nests that line the walls of great living caverns.

Nerubian workers avoid combat. When pressed into service or when faced with destruction, however, they are disciplined, particularly if a skilled leader is present. Nerubians are proficient with all simple and martial weapons. Quick charges and use of simple weapons like spears and javelins are their normal tactics. They may wield simple, though wicked-looking spears. Some nerubians also use longswords, axes and other martial weapons. They can also deliver a poisonous bite, but prefer the distance that wielding weapons offers.