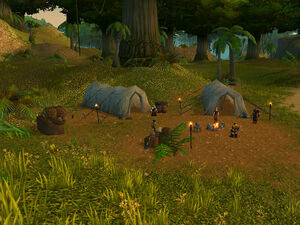 In the period before the reopening of the Dark Portal, the dwarven master hunter Hemet Nesingwary led an expedition into Stranglethorn to hunt some of the wild game that traversed the jungles. After the way to Outland was opened, Nesingwary left the Stranglethorn expedition in the hands of his son, Hemet Jr., and traveled to Nagrand to pursue more dangerous game.

Now Nesingwary has a proper road leading to his expedition. In addition, the encampment is now a full-fledged, fortified camp.[1]

When the Zandalari troll returned, the camp was attacked.

The subject of this section was removed from World of Warcraft in patch 2.0.1.