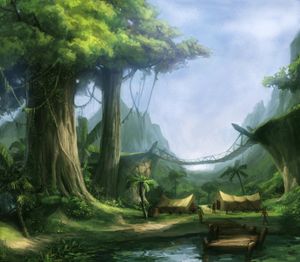 The Nesingwary Base Camp is Hemet Nesingwary's new location in Northrend. The base camp is located in western Sholazar Basin, just north of the Seabreach Flow, inside the Path of the Lifewarden, southwest of the Suntouched Pillar and west of the Wildgrowth Mangal. It serves as a full-fledged camp with a quest givers, an innkeeper, and a flight path.

This is basically where his ship ended up after crashing through the river's entrance from the North Sea, how they mistook that small gap as a main entrance into the area is unknown, but then Nesingwary hasn't had the best of luck arriving to new areas.

The Spirit of Gnomeregan spawns after players complete a short quest chain starting with the quest Need an Engine, Take an Engine. The Spirit connects to River's Heart, Sholazar Basin and either Fizzcrank Airstrip or Bor'gorok Outpost, Borean Tundra.