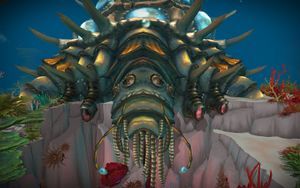 Nespirah is an extremely large Ancient,[1][2] found along the Silver Tide Trench in Vashj'ir. She is facing the Glimmerdeep Gorge. She had been put into a torpor and enslaved by the naga. Imprisoned Alliance and Horde slaves mined powerful magic pearls from the inside of the beast.

Earthmender Duarn and Erunak Stonespeaker follow the player into Nespirah's body. Erunak then has matters on the outside to attend to and leaves Duarn in charge. Duarn, with the player's aid, attempts to communicate with Nespirah to gain answers as to why she has allowed naga into her shell.

This is also the location where the captured Alliance and Horde soldiers were brought to from the Kelp'thar Forest. A small group of slaves have escaped and now fight the naga on the ledge overlooking the heart. The naga activities there are led by Overseer Idra'kess.

Nespirah Fluid flows through Nespirah's body and acts as her defenses from invaders. However, since Nespirah's will has been suppressed by the naga, her fluid is not capable of obeying her. This will change when the naga's hold on her is removed and she has awakened. 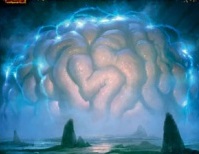