From Wowpedia
(Redirected from Nethaera)
Jump to: navigation, search

Nethaera (sometimes shortened to "Neth") is a Blizzard employee and Community Manager for the US World of Warcraft forums. She is called Candle by some, after her forum avatar.[1] Her real name is Danielle Vanderlip.[2] According to a forum post, she is married.[3]

Nethaera is known to play on PVP, RP-PvP and PvE servers.[5]

In mid-2007, Nethaera's forum account, along with Drokthul's, was hijacked (likely by a session mimic) and forced to post links to keyloggers on the official WoW forums.[6]

The situation is under control, everyone. I'm afraid they were victims of moderation. I must admit, banning them was fun. You may now return to your regularly scheduled program.

I don't think there is much to say really. Clean-up got a little dirty, but we got things taken care of and are working on finding ways to make these sorts of things less likely to happen for forum posters. There were a lot of those getting reposted very quickly yesterday, so it was about finding a source and cutting it off. We seem to have waves of these on and off we deal with as they come. Some are actual keyloggers and some are session mimics. From what I know the ones yesterday were the mimics, but they still make the forums messy.

Yes, I appreciated the irony of my signature yesterday, but it was still a good day. ;)

An example of the posts made by the CM accounts can be seen from the following: Nethaera and Drokthul. (Alternative image host here.) 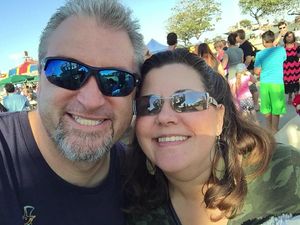 Naethera with Monte Krol in June 2015

Nethaera is part of the Community Team that won "Best Community Management team" at Dragon*Con 2012. [7]