From Wowpedia
(Redirected from Nether Ray)
Jump to: navigation, search

Not to be confused with ray or mana ray.
For information on the specifically named mob, see Nether Ray (mob). 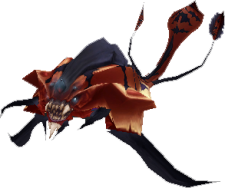 The nether ray is a beast native to Draenor/Outland and Bonich. It has a body much like a stingray's (thus the name) with a long tail and two feathery plumes. It has crystalline growths and stripes running down its body, and all types are brightly colored. Nether rays have been found in Netherstorm, Zangarmarsh, and Shadowmoon Valley and are tamable as hunter pets.

Nether Rays are among the most trusted, versatile mounts in all of Outland and beyond.[1] 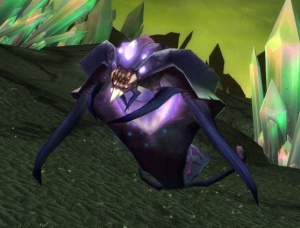 Native to the Terokkar Forest, nether rays spawn during the rainy season. Out of the hundreds of offspring resulting from one hatching, very few survive to adulthood.[2] Adult nether rays are relatively docile, but their younglings are short-tempered and highly energetic beasts.[3] The sting of the nether rays are filled with venom.[4]

While not especially big as a whole, at least one titanic specimen has been allegedly spotted by adventurers in Zangarmarsh, dubbing it "Count" Ungula. The Cenarion Expedition would be interested in proof of the creature's existence.

The nether rays on the forest world of Bonich are small critters that fly overhead in groups.

Nether ray mounts are epic flying mounts available to players who obtain exalted with the Sha'tari Skyguard. They come in five colors and can be purchased from Grella in Blackwind Landing.

Nether Rays are a family of hunter pets that are tamable starting at level 60. They allow hunters of any specialization to provide a bloodlust effect with the

[Netherwinds] ability. Prior to patch 6.0.2, this utility was only available to Beast Mastery hunters using the exotic core hound pet. There are five different skins available for nether ray pets, all found in Outland.