There appears to be more than one type of nether dragon in Warcraft lore, both of them have appeared in Outland. 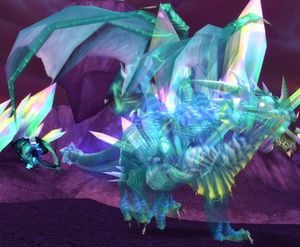 Nether dragon in World of Warcraft.

Following the Second War, the Black dragon eggs abandoned on Draenor by Deathwing were exposed to the arcane energies of the nether when the orc shaman Ner'zhul opened multiple portals to different worlds, shattering the planets and sending the remains into the Twisting Nether. The dragons that emerged from those eggs were no longer members of the black flight. These wayward spawn of Deathwing would come to be known as the Netherwing dragonflight.

Draconic nether dragons resemble the dragons native to Azeroth, except they are semi-transparent, have a shark-like jaw, and crystalline growths while in nether drake form. They are fully sentient intelligent beings and speak Draconic like normal dragons. They also share the ability to learn magic and take humanoid forms.

In Warcraft III: The Frozen Throne, nether dragons, nether drakes, and nether dragon hatchlings poured out of the dimensional gateways, and were implied to have demonic origins and are shown to have been brought to Outland by Magtheridon, having come from another world or the Twisting Nether through his gates.[1] 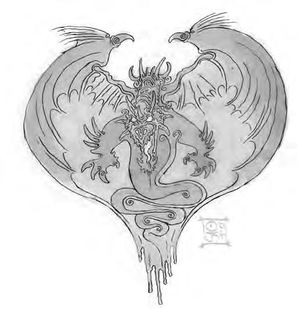 A Nether dragon from Shadows & Light.

TFT's explanation was referenced in the RPG and expanded upon;

They feed on mana and magic of all kinds and constantly patrol the Twisting Nether and those worlds open to it, such as Outland, for nourishment. Nether dragons are unallied with the Burning Legion or any other faction, and so pose a threat to any they encounter. Though intelligent, nether dragons do not speak. They can communicate telepathically but rarely choose to do so.

A nether dragon uses its greater arcane sight to home in on areas of powerful magic. It usually uses ethereal jaunt to approach invisibly, then unleashes its nether disjunction ability, quickened greater dispel magic, and a flurry of attacks against spellcasters. A nether dragon ignores nonspellcasters unless they inflict significant damage. A nether dragon uses its nether disjunction ability as often as it can, and uses quickened greater dispel magic every round on whichever foe has the most active spell effects. If severely injured, a nether dragon attempts to flee via ethereal jaunt.[4] They are cousins of netherwyrms, although some believe that netherwyrms are full-grown nether dragons.[5][6]

In a short story in Shadows & Light, the protagonists of the tale had eight nether dragons circling around them, and beyond the nether dragons a full-grown netherwyrm. They killed off half the drakes, but the mother was roaring to call more of her children.[5]

Connection to the Void?

The appearance of TFT's Nether Dragons is reminiscent of members of the Void in WoW: In both cases, their bodies appear to be composed of black/purple energy except for their eyes and a bluish/purple glow around their bodies (green in the case of the TFT Nether Dragon creep.) If the TFT style Nether Dragons do still exist in the Warcraft universe, they may somehow be connected to the Void. This would certainly seem to fit with the TFT and RPG description of Void Dragons as beings composed of pure Nether energy.