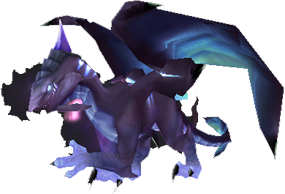 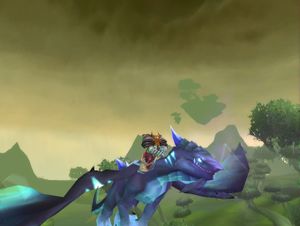 A nether drake in WoW.

A nether drake in Warcraft III. 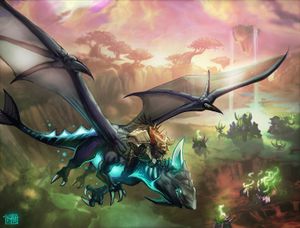 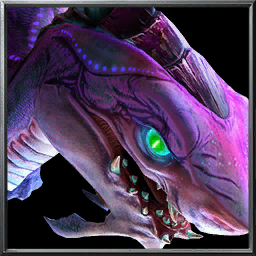 Nether drakes are the immature members of the netherwing dragonflight that are believed to be the spawn of Deathwing, but were affected by the incredible energies released by the destruction of Draenor. Living in Draenor's ruins, now known as Outland, the nether drakes are available as flying mounts to swiftly transport players around the shattered world.

Some nether drakes serve as epic mounts and are available only at level 70 and above as with all flying mounts. Special nether drake mounts were awarded to members of top-tier arena teams at the end of the first four arena seasons.[1]

Beyond the Untamed Horizon

Less than twenty years ago, the orcs' former homeworld, Draenor, was ripped apart by the violent energies of several dimensional portals that tore the very fabric of the planet to pieces. This catastrophic event left Draenor a broken, shattered world that the survivors came to call Outland. To this day, some parts of Outland are still unreachable by foot or boat, floating eerily on the horizon as silent reminders of the terrible fate that befell Draenor. Yet, the denizens of Outland have adapted and learned to harness some of the indigenous species as flying mounts, allowing adventurers to reach even the most remote and dangerous regions of this wild, untamed world.

One of the most exciting new features of World of Warcraft: The Burning Crusade will be the introduction of a new kind of mount that will provide players with unprecedented freedom to explore the world of Outland from an entirely new perspective. After reaching level 70, players will eventually be able to obtain a flying mount for their characters. Outland is home to incredibly varied and exotic fauna, and the sapient inhabitants of this world have trained several unique creatures as flying mounts. Both Horde and Alliance will have their own special type of mount, but there are also mounts that will be extremely rare even among the most powerful characters. The nether drake is one of these.

With flying mounts, players will be able to take to the skies, to soar among the crimson clouds of Hellfire Peninsula or watch as Nagrand's sea of grass swaying in the breeze far below as they make their way to new lands. Players will have full control over their flying mounts, allowing them to roam the skies and freely explore all regions of Outland. In fact, certain areas of Outland will only be accessible by air, as some parts of the ruined world are floating out in the void, unreachable except by those who command one of Outland's flying creatures.

A few of these "unlockable" areas are actually located near some of the lower-level regions of Outland; a player's journey will take them through the Dark Portal to the very ends of Outland and finally back to where they started, thus completing the circle – but now they will be able to access regions that were previously only viewable from a distance. Some dungeons also feature wings that can't be reached without a flying mount, and this should provide players with a profound sense of advancement after having gained considerable experience, new abilities, and powerful weapons and armor. In a way, the flying mount represents the most tangible accomplishment of a character's progress up to level 70, but it also serves as a key to the content that awaits players beyond the maximum level.

Origin of the Nether Drakes 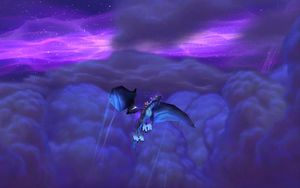 Two years after the end of the Second War, the black dragon Deathwing traveled through the Dark Portal to Draenor. Believing the world to be a relatively safe haven for his offspring, he secreted away a number of black dragon eggs before he returned to Azeroth. When Ner'zhul recklessly opened multiple new portals on Draenor, the magical stress tore the planet apart. The energies released in this catastrophe altered Deathwing's eggs, resulting in the nether drakes: ethereal dragons whose bodies are composed of energies from the Twisting Nether. Without Deathwing's guidance, these otherworldly nether drakes are just now finding their own way among the blasted ruins of Outland.

This video is kindly brought to you by Gnomeregan Gnews Gnetwork.

See Netherwing for a guide to Netherwing reputation and Netherwing drake mounts for information about the mounts.

[68] Survey the Land, which involves a ride on the drake Nethrandamus in the service of Altruis the Sufferer.