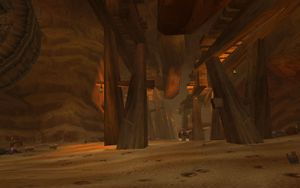 The Nethergarde Mines is an iron mine located in northern Blasted Lands. The mine is controlled by the Alliance from Nethergarde Keep. The Horde have recently begun attacking the mines to slow down supplying the keep.

The main entrance area is filled with dead Nethergarde defenders, beyond that Nethergarde miners can be found in mostly all the other sections. Some miners have accidentally released a demon, Illycor, that for some reason was buried deep within the mine. Chief Prospector Hondo leads the miners from his office in the upper chamber.

A couple of Horde infiltrators can be found hiding along the cart tracks awaiting operatives to help them in their mission.

When the Iron Horde began their invasion in Blasted Lands, they also took control of the mines and murdered its miners, whose bones where piled up in the lowest section. Unexpectedly, the miners came back as ghosts to haunt the lowest levels. 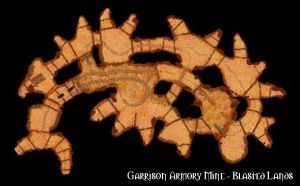 Map of the mine