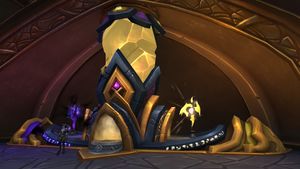 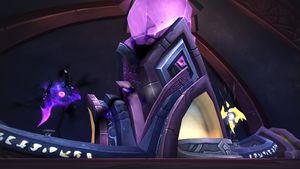 The Netherlight Crucible prior to the golden makeover.

The Netherlight Crucible allows you to upgrade your Artifact to unlock a new way to customize your Relics.

The Netherlight Crucible is an ancient remnant of Argus that once served as a source of considerable magic. Though its potential power is thought by many to be a gift, empowering it would require great sacrifice...as well as a delicate balance of Light and Shadow.

During the Argus Campaign, Alleria Windrunner slew Nhal'athoth and absorbed the void energy of its heart. She sent an adventurer to give the Remnant of Nhal'athoth to Velen and to tell him what they ha learned about the void incursions on Mac'Aree,[1] and he came to the conclusion that the Light and Shadow must coexist. Velen believed that the Essence of Shadow taken from Nhal'athoth's remnants would be exactly what they needed to bring balance to the Netherlight Crucible and give them the edge they need against the Burning Legion.[2]

Back at the Vindicaar, Turalyon believed it to be the right time to revive Xe'ra. After assembling Xe'ra's components and combining them with Light's Heart, Xe'ra was consequently restored. Xe'ra was delighted to have found the Chosen One, Illidan Stormrage, and wished to restore Illidan to his original state from before his demonic transformation. Illidan was reluctant to be transformed once more by Xe'ra, however, being content with seeking the Legion's end in his own form. When Xe'ra tried to transform Illidan by force, he resisted and destroyed Xe'ra with his Eye Beam.[3]

Xe'ra's death distressed Turalyon and many others. To lift their spirits Velen told Turalyon that the Light did not die with the Prime Naaru, that it still shined within all of them, and that it was imperative that they press on as they still had a world to save. Furthermore, not willing to let Xe'ra's passing go to waste, Velen gathered the essence of Xe'ra's Light[4] and imbued it into Netherlight Crucible.[5]

With the Netherlight Crucible thus empowered, the weapons of the Vindicaar's champions could be imbued by both the Light and the Shadow.[6]