The Netherlight Temple serves as the order hall to the priests of the Conclave, which consists of different priesthoods worshipping both the Light and the Shadow who came together to fight against the Burning Legion during their third invasion of Azeroth. It is hidden deep within the Twisting Nether,[1] deep in Legion territory.[2] The Legion had been looking for it for ages, but were never able to find it, until recently.[3]

Netherlight was originally a prison built by the draenei during their exile in order to contain and study the Void god known as Saraka the Lighteater. It was also built as a place to commune with the naaru, ponder the nature of the Twisting Nether, and conduct research into the Void.[4]

The draenei sought to devise a ritual that could turn the naaru back to the Light. To aid their quest, Alonsus Faol called together many priesthoods from all over Azeroth to work in unison, forming an order known as the Conclave. These worshippers of both the Light and Shadow alike gathered in the building's two wings, themed respectively after the Light and the Shadow. Turning the prison into a temple, Netherlight became their order hall. Together, they eventually managed to pool their energy and bring Saraka back to its original form, the naaru Saa'ra.[4]

Saa'ra's case is the only known occurrence of a Void god returning to the Light, and probably the first time this has ever happened too given the amount of time the naaru and draenei spent studying it, and that the participation of the most powerful priests in existence was necessary in order to achieve this feat.

The Hall of Balance

Sanctuary of the Light

Sanctuary of the Void 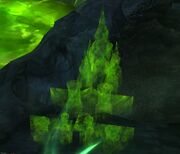