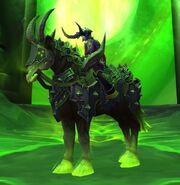 This spell is a quest reward from

A deadly combination of fel and horse.

In the beginning, Mor'zul Bloodbringer was the one who helped warlocks obtain their Dreadsteeds. When the Dark Horde moved on his Altar of Storms, Mor'zul was nowhere to be seen until the return of the Burning Legion.He decides to send a raven to Elithys Firestorm asking for the First's assistance.

In present day, Elithys Firestorm finds the First and sends them to Mor'zul Bloodbringer. Mor'zul reveals what he has been doing during his absence. During one of his rituals he was able to capture a Wyrmtongue. With some interrogation, he was able to find out that Lord Hel'nurath was creating a new type of Dreadsteed know as the Wrathsteed. He was able to create one and gifted it to his his general Arax'ath. Unfortunately, he is always on Xoroth and rarely appears. Mor'zul would like to get a hold on this mount and decides to summon him.

However, several ingredients are needed and the First goes to find them. They gather a ton of

[Chaotic Spinel] and an

[Unbending Potion]. When all items for the the portal are found, a

[Xorothian Calling Stone] is needed to call and bind the Wrathsteed. The First obtained the item from Zuriwa the Hexxer.

With all the preparations made, Mor'zul opens the portal. A large army of demons came through under the general's command until Arax'ath himself shows up. In a one one fight, Arax'ath would fall and the First enslaves the Wrathsteed.

Along with the Council and Mor'zul, the First dominates the demon and it eventually yields.