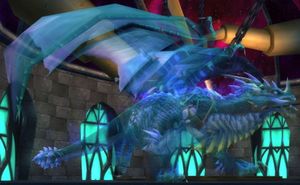 Netherspite is an immense nether dragon found lurking in the Celestial Watch, Medivh's personal observatory. As the only dragon found inside the dark tower, he will use his otherworldly powers to vanquish any creatures that attempt to go near him. This dragon's death is not required for further progress into the tower but he does control the trash between the Shade of Aran and the Chess Event.

Netherspite patrols the back section of his room, but his aggro radius is not particularly large allowing the entire raid to comfortably enter the room before the pull. The fight is entirely tactical: other than the enrage time the players' gear does not play as large a part in this fight as it does others.

The room itself is enormous, allowing plenty of room for players to maneuver. It is shaped like a square with a semicircular balcony attached to the far end.

NOTE - unlike most dragons, Netherspite will neither cleave nor damage players with his tail.

EDIT - As of Patch 3.0.2, Netherspite does do ~1000 damage per hit with his tail. This is easily negated by high armor and high avoidance.

At the beginning of this phase, three portals of different colors will spawn at fixed locations in the room and will begin emitting a beam of their respective color (see below) towards Netherspite. The beams do not slowly move toward him, but rather appear touching Netherspite once they are created.

If the beams are allowed to hit Netherspite freely, they grant him stacking buffs which strengthen or even heal him. The buffs on Netherspite last 5 seconds from last application (instead of the 8 to 20 seconds they do on players). The beams can (and must) be blocked by players who position themselves between a portal and Netherspite. Players blocking the beams are also affected by a stacking buff, having both a positive and a negative effect which grows more extreme with each second that the player spends blocking a beam. Although the positive effects are quite helpful for the fight, the negative effect makes it difficult (but certainly not impossible) for one player to block a beam for the complete duration of the Portal phase.

Once a buff "ticks out" (player leaves the beam long enough to lose the debuff — 8-20 sec), another debuff is applied to the player called Nether Exhaustion, which prevents him from intercepting that color beam for the next 1 minute and 30 seconds.

Portals will always spawn at the same locations in the room during all Portal phases, but their colors will semi-randomly change each time after the first Phase.

This part of the fight relies on individual player responsibility in that all players designated to block a beam ahead of time (see below for suggestions) must be aware of what beam they are supposed to be blocking and when so as to intercept it as quickly as possible.

Those not blocking a red beam deal damage or heal the raid. Because of the red beam's unique abilities, healers should not ever waste time healing the tank. Damage dealers need not worry about threat, since the tank has guaranteed aggro while standing in the red beam.

For each Portal phase, one or two players are needed to block each beam. Using one player is simpler, but requires much better gear. Using two players avoids stacking debuffs to dangerous levels, but requires intelligent coordination.

The blue beam is taken by damage-dealing classes (preferably with high health and/or shadow resistance). While their damage output increases rapidly, the damage received by them from Netherspite's shadow aura also increases rapidly and healing spells on them become less effective. Players staying inside this beam for too long becoming prone to be killed by a Void Zone.

Most raids do best by assigning one damage-dealer to take the blue beam for twenty ticks, then switching to a second damage-dealer for the rest of the phase. This avoids stacking the debuff to dangerous levels.

A Warlock is especially useful here, as he can replenish the health lost through the increased damage from his

[Drain Life] spell and can reduce his shadow damage taken. A shadow priest is also a good option since

[Vampiric Embrace] also scales with damage and heals the caster for a considerable amount. These classes are most easily able to take the entire duration of the blue beam. One healer should be designated to heal only the person in the blue beam.

The death of a blue beam blocker is not always a disaster. Any class and any spec is capable of blocking this beam. If the blocker happens to go down during the portal phase, any available player can simply hop in and ride the beam for the duration until the snag can be worked out.

The green beam rapidly heals Netherspite to full if it is allowed to touch him. It must be blocked at all times.

A manaless class (warrior, rogue, or feral druid (Note that a feral druid's mana will be drained, and prevent them from shifting. Don't try and use a bear tank in cat form in the green beam or he won't have the mana to change back to bear) can stay for a whole beam's duration and not receive any relevant debuff. The reduced energy / rage cost of abilities from this beam allows them to do more damage. A tank that is not currently taking the red beam is a good option.

Half the green beam can be taken by a healer to temporarily greatly increase his power. This makes it easy to keep up whoever is taking the blue beam. A healer that takes the beam for 20 seconds finishes with mana 4,000 below his maximum. This may be higher than his mana before the beam, so it is often a very good idea to put a healer in the green beam. Restoration Druids are especially effective in this - their HoTs tick for very high numbers, which can be useful to recover from the Netherbreath - however, Paladins and Shamans can more easily recover from the reduced mana pool.

Damage-dealing classes that use mana may touch the green beam for one tick. This refills their mana to full. They must be careful to get out of the beam quickly, so the designated green beam blocker does not get Nether Exhaustion.

Raids that have problems with the blue beam blocker dying usually are raids that keep healers out of the healing beam. If this is a problem, try using the green beam with a healer instead of just neutralizing it with a rogue or warrior.

Classes with high armor (i.e. Warriors, Bear Druids, Moonkin Druids in full leather, Paladins, Shamans, and Hunters) can block the red beam. The red beam gives them the massive healing and health needed to tank Netherspite. Despite the replenishment to full health every second, Netherspite can sometimes crit for very high numbers (upwards of 11k on a plate-wearing non tank). So leather and cloth wearers can still get easily one-shotted despite the augmented health maximum. Resilience from PvP gear is useful.

If two characters share a red beam, they must be druid bears, moonkins in full leather, or wear chain mail or plate. One player takes a beam for 20 ticks, then the next player does.

If one player takes the entire red beam, they must be druid bear or have plate mail and a shield. Any character will eventually be one-shotted if they stand in the entire red beam, so they must dance in and out of the beam to avoid some of the debuffs. To do this, they repeatedly take five stacks of the debuff, then shift to the side to let Netherspite take the next five stacks, then shift back in. To avoid Netherspite moving, they should not move backward.

Because of Nether Exhaustion (see above), two shifts of players must be used to block the beams. A solid rotation looks like this:

The Banish phase lasts for about 30 seconds:

There are two techniques for handling the Banish phase.

One technique is to leave Netherspite at the door with the designated red-beam tank for the next Portal phase and one healer. Everyone else runs to the far side of the room, by the telescope. The tank faces Netherspite toward the door, and the healer stands to the side. The players on the far side of the room bandage up and recover mana. This is generally the easiest maneuver.

The second technique is to make a tight circle around Netherspite and continue attacking. Non-tanks stay out of melee range. When he faces a player to perform a Netherbreath, everyone runs to his tail. If executed quickly and properly, this prevents anyone from getting hit, and Netherspite dies more quickly this way.

Another trick is to have a shaman drop a

[Searing Totem]. Netherspite tries to kill the totem with his Netherbreath(an AoE spell that does not kill it). It also aggroes Netherspite as soon as the banish phase ends, providing time for the tank to pick him up.

After 30 seconds, Netherspite starts a fresh Portal phase and clears his aggro table. This means that no damaging or healing spells can be used before the tank can gain aggro. This means that he will have to pick up Netherspite and then drag him over to the red portal or healers will be stuck. Other players should run to where their portals have appeared as quickly as they can.

Netherspite does not always leave the Banish phase immediately when his cooldown is up. Do not run back to him too soon.