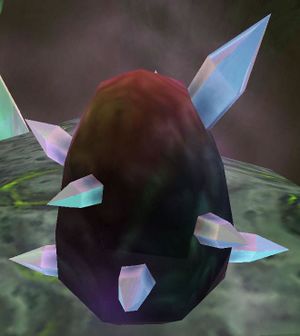 Netherwing Eggs has a chance of dropping from all creatures and item nodes on the Netherwing Ledge, in the Netherwing Mines or at the Dragonmaw Fortress of Shadowmoon Valley with a very low drop rate of 1% or less. They can also be found on the ground tucked under crystal clusters, in mining carts, through mining Nethercite Deposit, and gathering herbs from Netherdust Bush.

Their location is easily displayed by the tall pillar of violet smoke given off by the eggs, making their presence known from underneath rail tracks and over hills. Naturally, other players can see this as well, and competition for these can be fierce.

They also have a chance to drop from Netherspite in Karazhan.