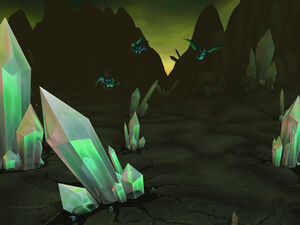 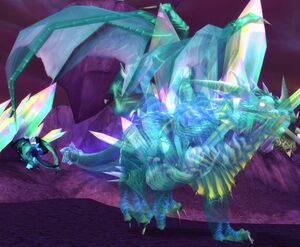 A nether dragon from World of Warcraft. 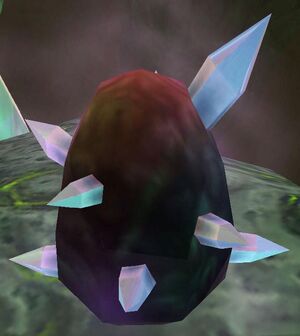 "This unusual brood of dragons was spawned from the eggs of Deathwing's black dragonflight, and infused with raw nether-energies. Now, they seek to find their identity beyond the shadows of their father's destructive heritage."
— Reputation journal

The Netherwing Dragonflight is an unorthodox brood of ethereal dragons whose bodies are composed of energies from the Twisting Nether. The Netherwing dragonflight can trace its origins back to eggs of the black dragonflight taken through the Dark Portal by Deathwing, which were accidentally exposed to a great deal of nether energies when Draenor was torn apart. Free of any bonds to their parent dragonflight, the netherwings now seek a new life in the turbulent, and often hostile, the world of Outland.

Nether dragons are highly unstable. As a result, they age rapidly but soon burn themselves out as their energies fade, giving them considerably shorter lifespans than other dragons.[1]

Near the end of the Second War, the black dragon Aspect Deathwing traveled through the Dark Portal to Draenor. Believing Draenor to be a relatively safe haven for his offspring, he secreted away a cache of black dragon eggs before having to suddenly retreat back to Azeroth. Following the Second War, Ner'zhul recklessly opened multiple portals on Draenor, and the magical stress tore the planet apart. The energies released in this catastrophe altered Deathwing’s eggs, resulting in the nether dragons. Partially corporeal and partially ethereal dragons who possess the ability to shift between the astral and physical planes. Without Deathwing’s guidance, these otherworldly nether dragons are just now finding their own way among the blasted ruins of Outland.

One faction of netherwing dragons, named the Netherwing, were attacked by the Dragonmaw orcs of Shadowmoon Valley and many were enslaved by Zuluhed, including Karynaku who was the leader of the brood. Their son Mordenai wanders the Netherwing Fields seeking adventurers to help free his mother and eventually help the Netherwing escape enslavement.

Another brood found at the Celestial Ridge in Netherstorm, is ruled by the corrupted crazed Veraku. Tyrygosa of the Blue dragonflight seeks to defeat Veraku and take control of the brood for their own safety and to study their physiology.

Sometime during the invasion of Outland, Ragnok Bloodreaver sought to overthrow Illidan Stormrage and become the new Lord of Outland and, eventually, Azeroth. To these ends, Ragnok united a band of fel orcs under his strict rule and bargained with Kadavan, an ethereal mercenary, in order to gain his help with enslaving nether drakes and dragons to bolster his forces.[2]

Eventually, he managed to defeat his rivals, the Dragonmaw clan, and took their surviving warriors and nether dragons to strengthen his army. With them, he set out to conquer the Dark Portal. His machinations were foiled by Jorad Mace and a combined Alliance, Horde, Aldor, and Broken army; who defeated his forces at the Stair of Destiny. Ultimately, Jorad Mace destroyed Ragnok's device which controlled his nether dragons and called on the Light to judge Ragnok, blasting apart his chest with a radiant swing of his hammer and sending his disintegrating body tumbling from the back of his nether dragon mount. With their leader dead and losing the nether dragons' support, the Alliance and Horde armies drove off the remains of Ragnok's forces.

Following the battle, Tyrygosa took the enthralled nether dragons to the Nexus in the hopes of freeing them from their enthrallment.

Tyrygosa learned in Outland that nothing could save the nether dragons unless an extremely powerful source of arcane power could revitalize them enough to free themselves. Tyrygosa, Kadavan, and Zzeraku opened a dimensional rift to Azeroth and brought a group of enthralled Netherwing dragons to the Nexus where they absorbed its magical energies. Yet Zzeraku and the nether dragons grew mad with power, and frustrated with everyone they've ever encountered trying to use them, decided to be masters of their own destinies and conquer Azeroth for themselves. Tyrygosa tried to reason with Zzeraku, telling him that by following Deathwing's path, Azeroth would rise up against them leading to their destruction. Though conflicted with Tyrygosa's sincere concern for his kind, Zzeraku believed that only by gaining power could he safeguard his people. The Netherwing dragons attacked the Blue Dragonflight, and in the midst of the chaos, Malygos woke up from his slumber. In his insanity, Malygos misinterpreted the Nether dragons' arrogant proclamations of being the embodiment of the Nexus and absorbed them and their power. The dragons' nether-warped physiology began to affect the Spell-Weaver himself, ultimately helping him regain some of his lost sanity.[3] With his sanity restored to him, Tyrygosa's patron declared war on mortal spellcasters, sending his flight out to do his bidding. Only Zzeraku managed to escape.

Being unable to guide the nether dragons to a better end weighed heavily on Tyrygosa. She later returns to Outland where she decides to look after a new generation of Netherwing eggs.[4]

One of the Nether Drakes is captured within Halls of Awakening of Blackrock Caverns, by the members of Twilight's Hammer.[5] They apparently use his raw energies to transform the "worthy" into drakonid. The said Nether Drake might possibly be a gift from Lady Sintharia, who abducted many of the Netherwing eggs with the help of Overlord Mor'ghor in Outland.

Nether dragons vary from being highly friendly to mortal races to downright hostile towards all beings. Many inherited the temper of their sire, the dark Aspect Deathwing. Many others, specifically those in the twisted lands of the Netherstorm, have fallen prey to a mysterious corruption. The nether dragons often see themselves as orphans, abandoned on Draenor as it began to shatter, uncared for and unwanted by their father.

They are fully sentient intelligent beings and speak Draconic like normal dragons. They also share the ability to learn magic and take humanoid forms.

Nether dragon names tend to have an "-aku" or "-ku" at the end. Others have names similar to those of their predecessors, the Black dragonflight.