New Hearthglen is the sizable base of operations for the Scarlet Onslaught, the remnant of the Scarlet Crusade which has journeyed to Northrend in their campagin against the Scourge and any others who would oppose them. According to Abbendis' diary, the location of the fortress is very near where the Scarlet Fleet made landfall: on the southeastern coast of the Dragonblight region. New Hearthglen serves as the main garrison and harbor for the majority of the Onslaught's troops and fleet.

There is no doubt that the Onslaught has come to Northrend prepared for war. The base was constructed in record time in spite of the Scourge presence and the biting cold of the Dragonblight. Great stone walls surround the town within, which includes a barracks, blacksmith, cathedral, a handful of houses, stables, lumber mill, chapel, and abbey. Menacing ballistae face outward from the walls. Along the coast, the Scarlet fleet lies docked in a sizable harbor.

The Scarlet forces are led by Brigitte Abbendis, who has relocated from Tyr's Hand, and Barean Westwind, the presumed-dead commander of the Scarlet fleet.

During the Burning Legion's third invasion, the remnants of the Onslaught are still active and are attacked by the priests of the Conclave in order to save Mariella the Heretic.[1] 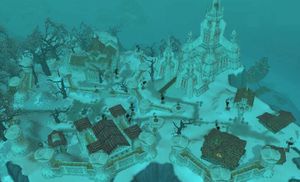 New Hearthglen from the air.