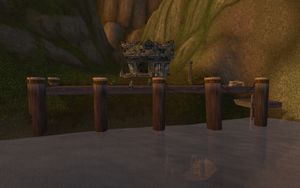 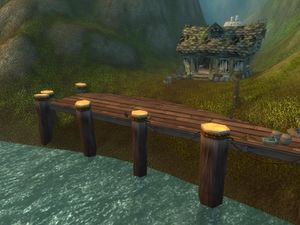 is a small area found on the western coast of Dun Morogh, just west of Coldridge Valley. The area holds one dilapidated human building and a dock. At the building there is an alcohol still, several open boxes of grain, and some bone piles. The dock itself features a sign reading "Newman's Landing", a table, several lanterns, and a sunken boat in the water below. The bones inside the house are all orc skeletons, with one lying in the fireplace. There are also several gnomish or goblin engineered-items scattered around. There is a white object on a southern table that appears to be a cup, with 2 letters and a hammer engraved on it.

In patch 3.0.2, the goblin named High Admiral "Shelly" Jorrik was added to the dock along with two Booty Bay Bruisers, but they were removed with Legion. 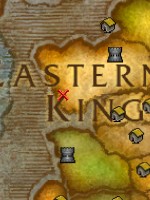 The location of Newman's Landing

Newman's Landing can be reached by swimming or flying north from Westfall or Stormwind Harbor, or west and then south from the Wetlands. It is also accessible via walking atop (or flying over) the mountains of Dun Morogh.