Nexus-Prince Bilaal was the leader of the Ethereum forces that attacked the Nexus during the third invasion of the Burning Legion.[1] These ethereals sought to "become void", by using the surge needles left behind by the blue dragonflight in Coldarra in order to widen the breach into the Twisting Nether.

Bilaal is first encountered as a projection after interacting with the Ethereal Communication Device in the Azure Dragonshrine.[1] Arcane mages and discipline priests in search of

[Light's Wrath], respectively, later invade the Beyond in the blue dragons' former capital, the Nexus, in order to stop Bilaal and the Ethereum's forces with the help of the blue dragon Azuregos. By the time the adventurers and Azuregos reach Bilaal, however, he succeeds in "becoming void" and transforms into a void revenant. Despite this, the adventurers succeed in killing Bilaal and stopping the Ethereum's efforts.[2]

Who dares to...? Ah, what have we here?
Another intruder come to claim the treasures of the Nexus Vault!
You are too late, <class>! Even now the powers within the vault serve to widen the breach into the Twisting Nether.
With this power, the Ethereum will become unstoppable. We will become void! 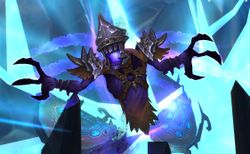 Stage 4
Fools! You may have destroyed the Surge Needles, but you are too late to stop us! The power of <Aluneth/Light's Wrath> will rip open the breach!

Stage 5
Intro
You are too late, interlopers. Nothing can stop me now!
I have become void!

Aggro
The Ethereum will rise again!

Death
What!? The void cannot be defeated! Noooo!

He needs to be defeated for