Convinced that vast riches lay within the depths of the Mana Tombs, Nexus-Prince Shaffar has spent untold amounts of his own considerable fortune to move an army into the shadowed halls of this crumbling ruin, and to keep competing ethereals out. The prince's greed knows no bounds, and he has vowed to uncover the mysteries of the Mana Tombs or die trying.

Nexus-Prince Shaffar starts with three Ethereal Beacons surrounding him. These must be killed quickly or an Ethereal Apprentice will spawn in its place. Depending on how many damage-dealing classes the party consists of, each member should be assigned one beacon to kill. Each beacon has approximately 2600 health. Additional beacons will spawn one at a time as the fight progresses and should also be killed. Shaffar will yell, "I have such fascinating things to show you!" when one appears. This happens approximately every 10 seconds, so be ready for one even if he does not yell. If a beacon is not killed quick enough, an apprentice will spawn in its place. The apprentice can be crowd-controlled if necessary, such as being polymorphed by a mage. The apprentices do not have much health and can be killed, but they inflict a lot of fire and frost damage very quickly if not dealt with immediately. When there are no beacons or apprentices to deal with, players should focus their damage on Shaffar.

Nexus-Prince Shaffar does not deal a lot of physical melee damage, but does deal a lot of spell damage: fire, frost, shadow, and arcane. Paladins can use

[Resistance Aura] and priests can cast

[Shadow Protection] to minimize incoming spell damage, also his spells can be reflected with a warriors

[Spell Reflection]. He occasionally casts Blink. This does not clear aggro and he will not teleport far away. However, he often casts

[Frost Nova] to snare players in melee range just before he Blinks, allowing him to cast spells uninterrupted. Warriors are able to use Spell Reflection to minimize spell damage taken. The tank must be ready to run toward him and maintain aggro when Frost Nova wears off or is removed, though aggro is generally not an issue because the other players will also be focusing their damage on the Ethereal Beacons.

If the party consists of primarily melee classes, players should stay near Nexus-Prince Shaffar. This ensures players will not have to run far from Shaffar to be able to attack the Ethereal Beacons and then resume attacking him.

This fight is extremely difficult in Heroic mode compared with the rest of the instance. The beacons turn into apprentices much faster and spawn with 7000 hits (you may have trouble in killing all initial beacons before they spawn), and new beacons are spawned at an increased rate. The fight is very difficult with certain group makeups, as it is extremely difficult to deal sustained melee damage to Shaffar because of his near-constant usage of both Frost Nova and Blink.

It is strongly recommended to not attempt to ignore the adds (an effective strategy in some other similar fights), as they pile up very quickly and their damage output will overwhelm almost any group well before Shaffar can be taken down. Because they appear in semi-random locations around the room, it is difficult to chain-fear them (although a Warlock can manage this to some extent, and

[Curse of Tongues] will help to mitigate the adds' damage while they are not feared.) It is extremely difficult for any tank to hold enough aggro on all the adds, so your healer(s) will eventually be focus-fired down by the uncontrolled ones. 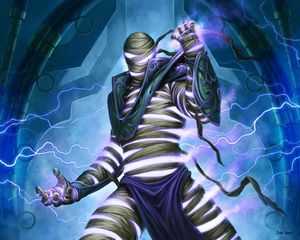 The image on the TCG card "Ethereal Plunderer" appears to depict Nexus-Prince Shaffar.

If your group have a Mage or Warlock, they can use their

[Soul Fire] spell on one of the beacons at the start of the fight. The spells have a long cast time, and can be started before the boss is actually engaged. This will make the first beacon kill extremely quick.

It is very helpful to have all damagers focus on killing the initial wave of beacons/adds before starting to attack Shaffar. This eliminates a lot of the confusion at the beginning of the fight, as well as giving the tank time to build aggro.

The main thrust of the fight is sustaining relatively high DPS on Shaffar while killing and/or controlling the adds well enough that your healers are not overwhelmed. Shaffar uses multiple types of magic, so it is difficult to mitigate his attacks substantially by stacking resistance; healer mana usage generally becomes the limiting factor. A high-HP tank is preferable to one with a lot of avoidance/armor, as Shaffar deals comparatively little melee damage. Shaffar does not have that many hit points; if he gets below 20-25% health but your healers are running out of mana, you may be able to kill him by going all-out damage and simply ignoring the adds. Note that the adds do not despawn after his death, but it doesn't really matter if the group wipes at that point.

Melee DPS is at a substantial disadvantage when fighting Shaffar. He uses his Frost Nova and Blink abilities very frequently to move out of melee range, and trying to track his movements can be extremely disorienting. It is strongly recommended to use melee damage on the adds and ranged damage on Shaffar if at all possible. These abilities also make Shadowfiend usage much more dicey, making the fight even tougher on a Priest healer.

Because Shaffar deals almost exclusively magical damage, a Warlock can effectively tank the boss while still dealing a large amount of damage through DOTs and holding aggro by using Searing Pain as much as possible (a Balance Druid or Elemental Shaman might also be able to pull this off with enough HP, although aggro might be an issue due to spell pushback reducing their DPS.) In this case, the "conventional" tank can be used to hold aggro on the adds while melee damagers kill the adds and ranged attack the boss.

If your party is still not strong enough to maintain damage on both adds and Shaffar you can attempt to continuously kill the Ethereal Apprentices until Nexus-Prince Shaffar has run out of mana. At this point, he is likely to be at greatly reduced health and unable to summon Ethereal Apprentices until he has regenerated enough mana to do so. This strategy relies more on your healer's mana regeneration. If you attempt Shaffar with this method, prepare to be fighting for approximately five to seven minutes.

Intro
What is this? You must forgive me, but I was not expecting company. As you can see, we are somewhat preoccupied right now. But no matter. As I am a gracious host, I will tend to you... personally.

Summon beacons
I have such fascinating things to show you.

Death
I must bid you... farewell.