This article is about the 5-man instanced dungeon. For the Borean Tundra sub-zone, see Nexus.

The Nexus is a level 71-73 wing of the Nexus dungeon hub in the Borean Tundra. The dungeon layout is very open. You can go into different "wings", but the final boss, Keristrasza, a captured red dragon, can only be freed from her ice prison when you kill the previous three bosses.

To get there, you need to ride to Amber Ledge in northwestern Borean Tundra. A dragon will then fly you over to Coldarra. The entrance to the dungeon is somewhat hidden at the bottom of the rifts in the middle of Coldarra. Just go down, and when you see the Arcane Serpents, you are there. 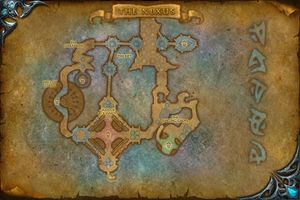 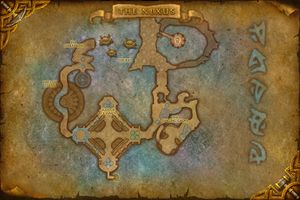 In order to reestablish his dominance over magic, the blue Dragon Aspect, Malygos, has launched a ruthless campaign to sever the link between mortals and the arcane energies coursing through Azeroth. To this end, his blue dragonflight is redirecting the ley lines of the world to the Nexus, Malygos' towering lair.