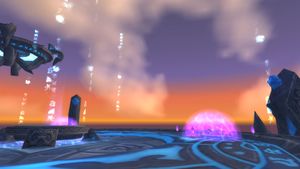 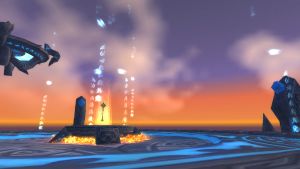 The Nexus Vault is an enchanted vault located deep within the Nexus where the blue dragonflight stored some of its most powerful artifacts, two of which were

[Light's Wrath]. The entrance to it was broken off when Malygos breached the Twisting Nether during the Nexus Wars.[1]

The vault has recently become weakened, allowing the energies of both Aluneth and Light's Wrath to slowly break free and begin to lash out into the outside world. The Ethereum are attempting to use the energies in the vault to widen the breach into the Twisting Nether in order to allow them to "become void".

Arcane mages and discipline priests in search of Aluneth and Light's Wrath, respectively, travel to the Nexus Vault to claim their artifacts after defeating the forces of the Ethereum outside.