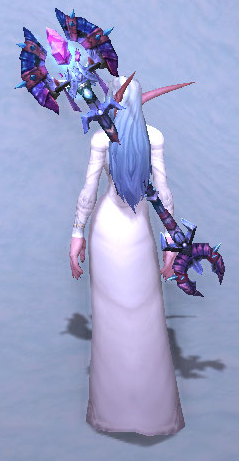 Nibelung drops from Lady Deathwhisper in the 25-man version of Icecrown Citadel.

The Nibelungs in Norse mythology were the royal family of the Burgundians, said to hold a massive treasure hoard. The association of the Nibelungs with the Norse mythical Valkyrie comes from Richard Wagner's four-opera cycle Der Ring des Nibelungen, which is based on the 12th century German epic poem Nibelunglied and various Norse sagas. In the operas, the Nibelung are a race of dwarves.

The effect portion of the staff could be seen as a slight reference to the Valkyrie Profile games by Square-Enix as Nibelung Valesti was the signature finishing move of the series' most memorable characters; Lenneth, Hrist, and Silmeria Valkyrie.